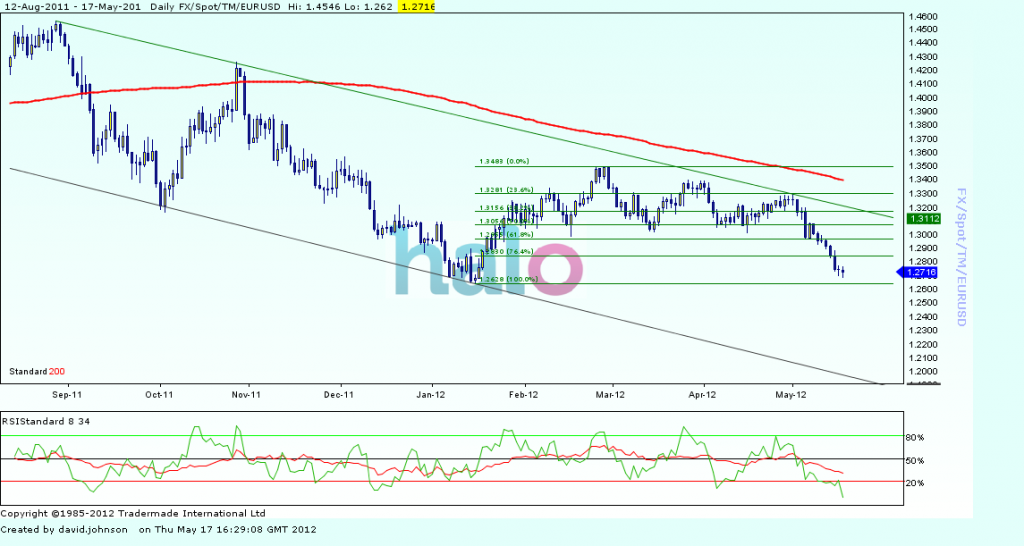 As this graph from Halo Financial shows, the dollar has gradually strengthened over the last six months from about $1.45 per Euro in September 2011 to $1.26/Euro today, a 13 percent reduction in like-for-like sales prices for exporters.

A Reuters article states dealers are expecting the trend to continue down to $1.25 or lower, yet as we go to press 1.25 has been reached and the fall continues. The EU is America’s largest export market; taken as a whole, slightly exceeding NAFTA partners Canada and Mexico ranked No. 1 and No. 3.

China, by comparison, comes a long way down at No. 4, marginally above Japan and then Germany, according to the US Department of Commerce.

So the exchange rate to the Euro is crucial for US competitiveness. A weaker Euro discourages Europeans from buying US exports and encourages US buyers to consume more EU exports. The surprise is US exporters of steel mill products have managed to hold their own against a rising dollar and depressed export markets. 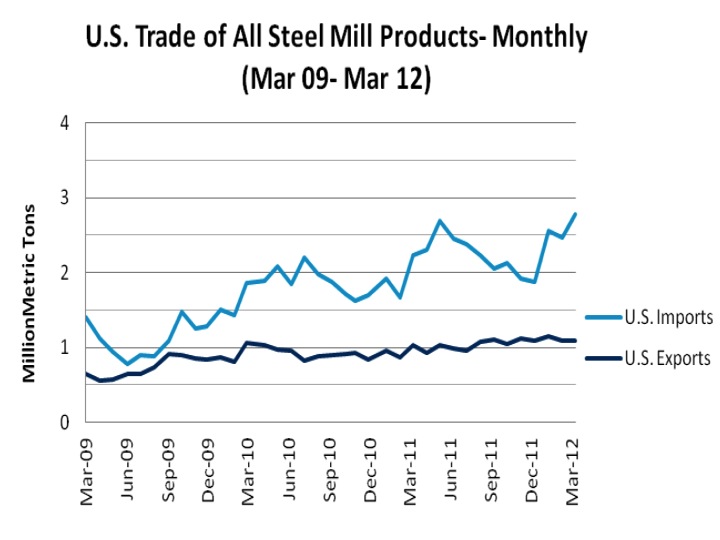 As this graph from the DOC shows, exports have remained steady in spite of a strengthening dollar, although imports have surged in recent months, partly because of improved competitiveness for overseas suppliers due to currency, but partly because the US is one of few growing markets into which overseas manufacturers can sell.

In spite of import competition, US mills have managed to retain relatively good capacity utilization, hitting 80% in the first quarter, as mills have matched working capacity to demand. The US steel industry’s ability to compete and operate efficiently is imperative in an economy still struggling with post-crisis recovery and with sectors such as construction deeply depressed. A recent report by Timothy J. Considine, professor of energy economics, University of Wyoming, states that, “Every one job in the U.S. steel industry supports seven jobs in the U.S. economy, reflecting its ripple effect on employment.”

For 2011, the report states, the American steel industry directly employed 150,700 and, given the multiplier effect, supported more than 1,022,009 jobs due to the integrated nature of steel in just about every other industrial activity.

No one is accusing Europe of deliberately depressing its currency to gain competitive advantage, however. (This is not like the currency manipulation practiced by, say, China — which the Brazilians and others have been so vocal in opposing.) The Euro’s woes are just that, a reflection of the dire political/economic situation. Every time disagreement surfaces between Germany and its core partners, or bond rates rise for new debt issued by Spain or Italy, or (worst of all) speculation returns over Greece’s exit from the Euro, the currency falls further.

With no immediate end in sight, the probability is that sores will continue to fester and US exporters will remain under pressure from a currency stronger than it would otherwise prevail.