What Rebar Prices Tell Us About Steel Imports

For those of you steel industry observers, nothing has appeared as dramatic as the June price drops for steel scrap.

So we note with interest the latest trends involving steel imports as reported by the International Trade Administration and their impact on both domestic steel pricing as well as the future of steel prices for the balance of this year and into next year.

Notable increases include plates from multiple locations, including Brazil and Turkey growing 178 percent and 176 percent respectively.

Our quick analysis would suggest that (higher) import levels during the first few months of 2012 have more to do with foreign producers riding the cyclical steel price wave that has taken prices up beginning in the fourth quarter on through the first month or so of the second quarter.

This trend has occurred over the past couple of years. Because rebar imports depend upon US steel scrap supplies (see our previous article on recent scrap price trends), now that scrap prices have fallen off, we’d expect US rebar imports to further decline. In addition, construction market indicators suggest continued downward price pressure: 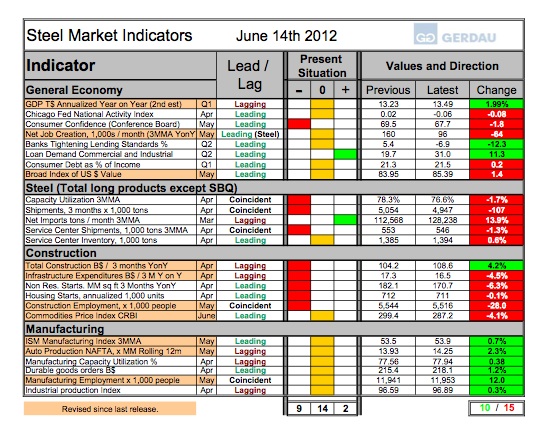 In fact, our own MetalMiner IndX℠ Construction MMI® for June suggested metals prices within the construction sector had lost some steam: 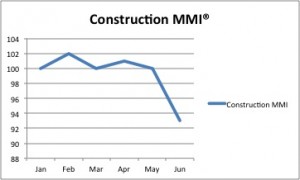 However, we have only one data point and July/August numbers may tell a different story.

According to Peter Wright of Gerdau Market Update in his report of June 14, “the export market has been leading domestic scrap prices down for all of this year,” yet rebar prices have not collapsed, based on this chart: 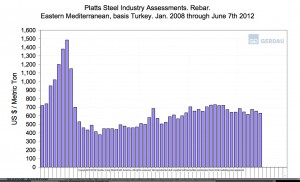 However, rebar price trends in Asia (which have come down slightly) will continue to put pressure on rebar prices globally.

Nevertheless, US steel producers have cause for concern. This chart, also from the latest International Trade Administration Steel Market Steel Industry Executive Summary for May 2012, shows the earnings health of the domestic steel industry: 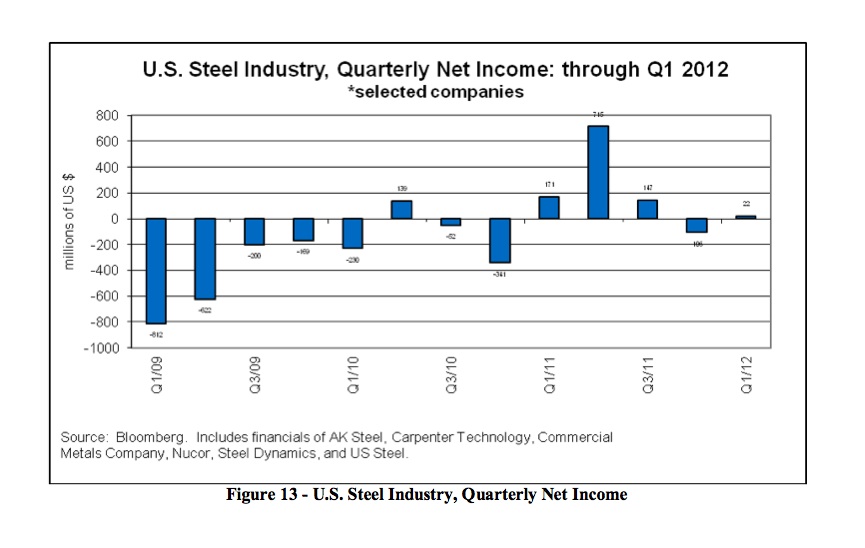 These producers have hardly set the world on fire. Downward earnings guidance by many of the steel producers, an unsigned highway transportation bill, a falling euro against the dollar, declining metals prices across the board, and import surges will remain closely watched.

We will follow up this story after the US Department of Commerce Import Administration updates its numbers for June.