Is the LME Failing Metal Consumers?

Once can forgive zinc consumers for asking what on earth has happened with the price of their raw material.

Sure, if you look 2-3 years down the line, one may see a supposed shortfall in zinc mine supply. The closure of major mines such as Minmetals Century will, as we have written about recently, remove a significant source of supply sometime after the middle of the decade.

But as it stands today, the market remains in over-supply.

According to a Reuters article, the International Lead and Zinc Study Group (ILZSG) estimates that global mine output surged by 11.4% in the first four months of this year and the World Bureau of Metal Statistics (WBMS) estimates the market had a half a million ton surplus last year with stocks rising by nearly a quarter of a million tons.

Meanwhile Chinese production has soared by 22% reducing the country’s imports of concentrates to 772,000 tons (bulk weight) in January-May, down by 35% over last year and the lowest volume in the first five months of any year since 2007. As the Reuters article says China’s call on the rest of the world’s zinc raw materials has sharply diminished.

So with plentiful supply and reduced demand from the world’s largest consumer, why has zinc moved back into a premium over its sister metal lead? And why has the price held up relative to other metals behaving more like a metal in deficit than surplus?

Why indeed?  For the same reason that aluminum smelters have avoided the worst effects of 4.5 million tons of exchange traded stocks and not had to close capacity to balance the market…zinc producers have enjoyed higher prices at the expense of consumers by the distortions of the LME.

The LME claims, by virtue of its size and liquidity, that it provides the fairest reflection of global prices. But in reality, it serves as a market if not rigged in the favor of its own members then at least significantly influenced by them. Do LME prices reflect the true value of any metal?

Any economics student will default to the line, “the market price is whatever someone will pay for it,” and indeed if enough transactions occur every day by enough parties then in theory a true and fair market price should prevail. Except the LME, policed by its own internal rules, set by its own members, allows individual parties to build up dominant positions without declaring them.

Furthermore, the LME, perhaps unintentionally allows those same members to control physical delivery via their ownership of the warehouse system. In a stock market, we’d call this  market manipulation. At the very least, such participants would have to declare their positions. But the LME follows its own laws.

I will no doubt receive howls of protest, as I have in the past, from brokers who claim the market and the warehousing system operates in a totally fair and open manner. But to my mind any market that restricts delivery and allows players to anonymously build up dominant positions such that front month or prompt delivery of prices becomes clearly manipulated, see chart, can’t serve as a fair and open market. 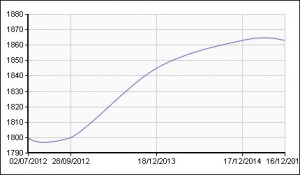 One day, no doubt some years from now, we will look back on the current system and ask how did we allow such a globally important price setting market place to operate in this way. Until then consumers will continue to pay over the odds so that the major market members, or at least some of them, can influence the market to their own advantage.