Tucked quietly away in a vault outside of Paris, the famous yet humble International Prototype Kilogram, or “Le Grand K,” sits waiting for scientists to determine its fate.

Created in 1879, “Le Grand K” is much more than a lump of metal—made from an alloy of platinum (90%) and iridium (10%). In fact, it is the “perfect” standard for what a kilogram weighs and at present, all standards of mass must ultimately be traceable to it.

Unsurprisingly, “Le Grand K” is treated with the utmost care — vacuum-sealed under three bell jars. And, as Mental Floss notes, “since hydrocarbons on fingertips or moisture in the air could contaminate its pristine surface, it goes untouched for decades, under triple lock and key at the International Bureau of Weights and Measures” —only surfacing every 40 years for a good cleaning, and a comparison weight check to its 80 official replicas, which have been flown in from around the world. 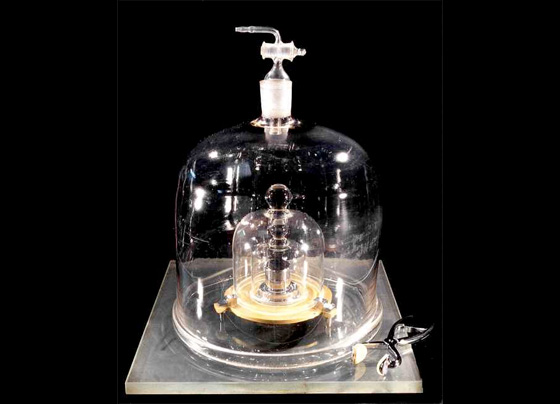 So, what has everyone in a hullabaloo? Well, “Le Grand K” may have a weight problem…

According to Mental Floss, at “Le Grand K’s” “most recent weigh-in in 1988, it was found to be 0.05 milligrams—about the weight of a grain of sand—lighter than its underling replicas.”

The craziest part of the situation? No one knows where the weight went. That’s right. Vanished into thin air. Some theorists suggest that, “Le Grand K” may be “outgassing,” or rather, air has been slowly leaking from the metal. Others theorize that the replicas are gaining weight – as they are handled more often.

Whatever the explanation, the weight loss is causing some stress in the scientific community. Because if the kilogram is wrong, so are the joule and candela, which would open up a whole other can of worms.

So, what are scientists doing about the potential issue? Well, for starters, many are scrambling to replace “Le Grand K.”

Mental Floss notes that, “Australian scientists are polishing a one-kilogram sphere of silicon, hoping that they’ll be able to count the number of atoms it contains to create a more accurate standard. American physicists at the National Institute of Standards and Technology (NIST) are attempting to redefine a kilogram in terms of the amount of voltage required to levitate a weight. But so far, neither approach can match Le Grand K’s accuracy.”

So, without a perfect replacement, “Le Grand K” shall remain – safe and undisturbed until its next weigh-in.

If you’d like to learn more about the kilogram (and one of its replicas), I’d suggest the following video from the National Physical Laboratory (NPL).