It’s about that time for quarterly reports, and they sure are cropping up with regularity these days. From company earnings to semiannual Federal Reserve updates to ETF inflow/outflow reports, one issue resounds: the global economic outlook is still uncertain.

How does this affect commodities?

From an ETF perspective, Nick Brooks, head of research and investment strategy for ETF Securities (ETFS), gave a quarterly summary and outlook recently, showing that not all has been rosy lately.

Industrial metals, although representing a small percentage of total flows, changed markedly: after experiencing a net flow of $410 million in Q1, saw a negative net flow of $176 million in Q2, according to an ETFS document. Aluminum, copper, nickel, tin and zinc ETFs all dropped; only lead had a positive flow.

“The main reasons for [the industrial metal ETF outflows] are the revisions downward we’ve seen for GDP growth rates,” Brooks said. Earlier in his presentation, he mentioned: “My greatest concern is that we’re starting to see signs of the US economy moderating. I was concerned about the ISM PMI [dipping] under 50.” 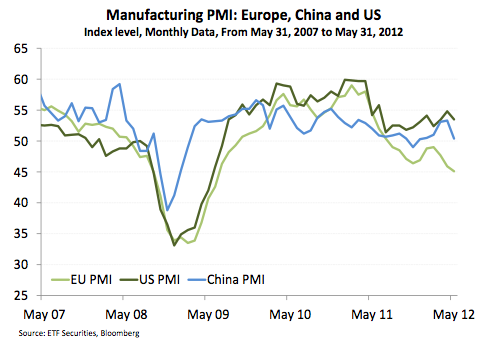 Weaker retail sales and a weakening durable goods sector are front and center; so is the continuing EU banking crisis, which Brooks maintained the US is not safe from. From an investor point of view, Brooks also said, the approach should be to ease up on the monetary side.

Cue Ben Bernanke. The Fed chairman, speaking to the congressional banking committee shortly after Nick Brooks’ presentation, echoed the concern about a slowdown in the US economy, which “decelerated in the first half of this year.”

Employment is still an issue, with 7 percent or higher projected by the end of 2014.

Bernanke testified that a “fiscal cliff” looms if Congress doesn’t act; he urged a mix of action addressing long-term sustainability, with a short-term eye on the fragility of the economy.

Ultimately, according to Brooks, we may see a bout of risk appetite if the Fed goes ahead with QE3.

In turn, this could affect commodity ETP flows and short- to medium-term commodity prices.