Turns out Jorge Vazquez and the rest of Harbor Aluminum’s downward revisions for 2012 aluminum prices and beyond aren’t the only ones. The rest of the metals sphere, from copper to nickel to zinc, is souring on price outlooks and forecasts as we pass the midpoint of 2012.

According to a recent Reuters mid-year poll of metals analysts, the usual recent suspects — EU sovereign/bank debt turmoil, tepid US economy, China slowdown — are to blame for this. The IMF has downgraded global growth for next year, and naturally concern arises for how this will affect metal demand. Here’s where the median price forecasts for copper, tin, nickel, zinc, lead and aluminum stand: 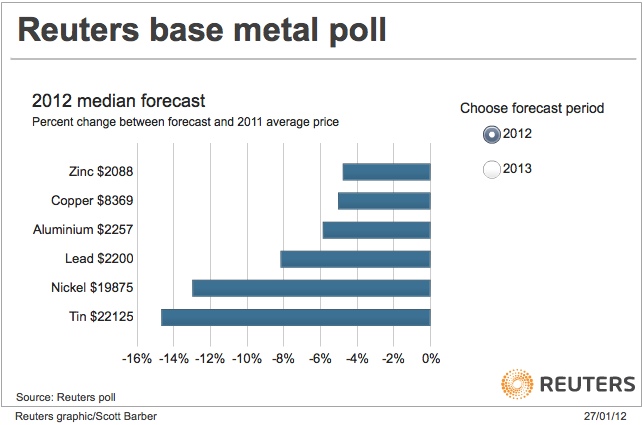 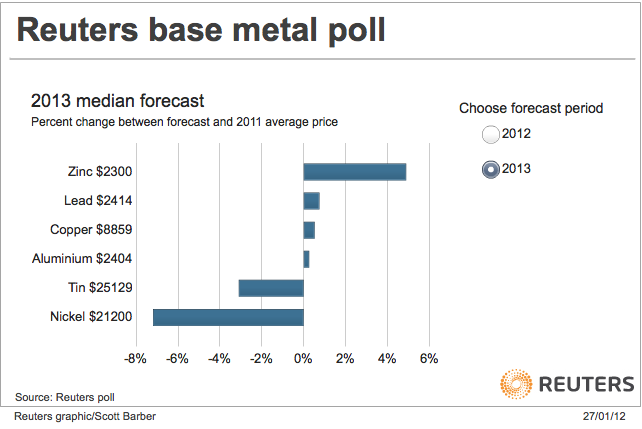 The majority of those surveyed expect to see surpluses for tin, copper, zinc, nickel and aluminum. (Harbor, ever-bullish, doesn’t see an aluminum surplus.)

Daniel Brebner, analyst at Deutsche Bank, pointed out to Reuters’ Andy Home that “whether a market is in surplus or deficit right now is secondary to the broader risk-on-risk-off flow of capital. ‘The price is largely impacted right now by perceptions of risk,’” Brebner was quoted as saying.

The first is that the influence of current events/happenings in forecasting is very strong (behavior researchers call it “anchoring”), so it’s not surprising that the dour pall cast by the EU crisis is affecting forecasts. The second point refers to the tendency for forecasts, as a result of any poll, to cluster, due to each analyst’s awareness of how the others are responding.

So overall, he concludes, perhaps all of these sad forecasts through 2013 may not necessarily be justified.

Finally, the gloomy climate for metals prices bodes well for some big metal buyers. OEMs aside, entire governments are eager to procure industrial metals at these bargain basement prices.

The state procurement agency raised its metals budget last month to 580 billion won ($507.3 million), a whopping 60 percent increase from last year. According to PPS data, as of the end of June, the agency had enough copper to meet 37.6 days of demand — its target was 80 days — and 47.6 days of demand for tin against a target of 75 days.

According to estimates from the International Tin Research Institute (ITRI), Korea only holds 2,000 tons of tin inventory currently, while it usually imports 16,000 to 17,000 tons of tin per year.