Iron Ore Demand, Prices Likely to Pick Up Next Year

*Iron ore price update: according to the MetalMiner IndX℠, the high Chinese price of Australian 61.5% iron ore fines has dropped more than 5 percent over the past week, while the low price has dropped nearly 5.5 percent.

Firstly, while Chinese demand is slowing from double digits just two years ago, demand is still expected (current H2 weakness excepted) to grow at 4 percent per year. That is a staggering 30 million tons-per-year increase each year, supported, HSBC argues, by per capita demand for steel, which is still 20-30 percent below most other markets that have reached a peak steel demand maturity.

Even after the massive infrastructure and housing investments of recent years, cumulative steel in place is still only 30 percent of a developed economy.

On the supply side, India remains largely out of the frame as a supplier denying the market a valuable source of some 50 million tons of supply. Furthermore, while the majors have made much of their investment plans and projections of ever-rising supply, the bank is of the opinion they will fall short of expectations.

The supply market was predicted to move into a significant surplus, in the region of 280 million tons by 2013-14, but this has now been trimmed to 125 million tons. As a result, the bank has revised its forecast for prices through to the middle of the decade as the following chart courtesy of HSBC shows. 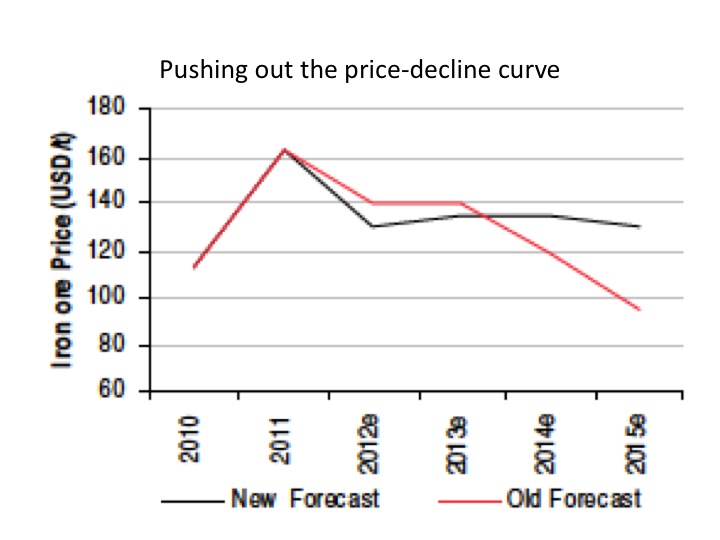 It has been a source of some debate as to why iron ore prices have held up as well as they have when other commodities have fallen.

Spot iron ore in Asia is down only 2.5 percent in year-to-date terms at $135.10 a ton, compared with a drop of 8.5 percent for Brent crude oil and 6 percent for the Thomson Reuters-Jefferies CRB Index. Why should iron ore outperform another staple of the industrial world — crude oil?

One reason is China’s own domestic production of iron ore is failing fast, particularly in terms of grade, with the result that import prices are supported by a rising domestic cost of production. 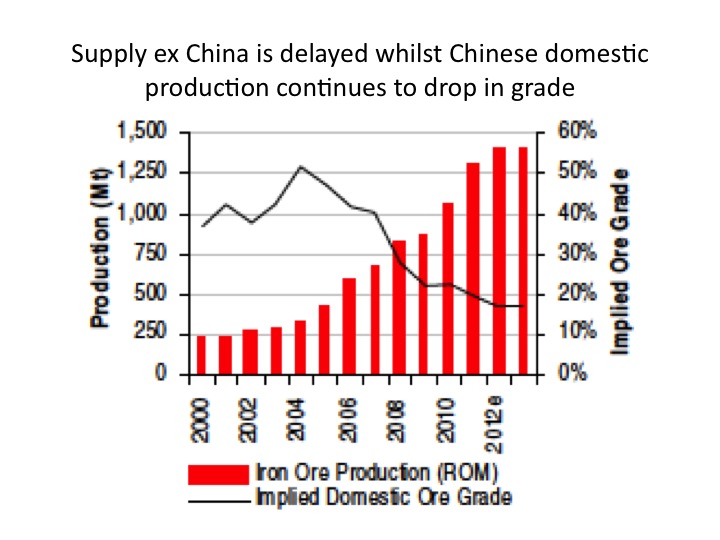 Chinese steel mills don’t import because they like to, they import because it’s cheaper than using domestic ore; as that domestic price rises, so does the price they are willing to pay for imports. The big three iron producers are well aware of this and are capable of trimming production to match demand if a surplus becomes a problem.

Although the short-term outlook for steel production, steel prices and iron ore consumption in Asia looks challenging, the bank predicts that next year production, demand and prices will pick up.

If they are right, iron ore and steel consumers may not get the benefit of lower prices that some had been predicting.