Pity the tin buyer — or indeed, any metals buyer who is exposed to tin prices, such as in plate, solder, and other forms.

The tin market has been like a roller-coaster the last 12 months, driven not just by macroeconomic issues and supply-demand fundamentals, but also by political activity in Indonesia, swing producer of seaborne tin to the world. 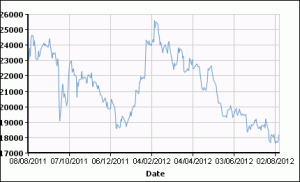 Depending on whose figures you take, Indonesia exported 96,000 tons last year, according to Reuters, accounting for around a quarter of global usage; but this figure could be as much as 40 percent, according to Businessweek. Either way, Indonesia’s supply to the market is, even more so than Saudi Arabia’s oil, the swing production that has the greatest influence on price.

In the face of uneconomic prices, smelters in Indonesia’s state and private sectors jointly backed voluntary curbs on shipments in the final quarter of last year in a bid to drive the price back to $25,000 per ton. Meanwhile, stockpiles monitored by the LME plunged 43 percent in the three-month period, and prices recovered by January to $23,000 per ton.

But the action was officially ended on Dec. 31 amidst acrimony that the largest producers, Timah and PT Koba, only limited spot sales yet continued to ship against term contracts, counter to the private sector’s understanding of “limiting shipments.”

In spite of LME stocks standing at some 11,000 tons this week compared to 21,000 tons at the end of September last year, the price has since collapsed again and currently stands at a little over $18,000 per ton.

This time, the only cutbacks have been voluntary, made by suppliers unable to cover costs at current prices. No serious attempt is being made to resurrect the agreement of last year, but according to Reuters, last year’s is more a sign of things to come than a one-shot pony.

As the Indonesian mining sector gradually becomes less fragmented and more production comes under the control of larger producers, government pressure to organize production for price rather than volume and normal commercial pressures will converge to encourage prices higher.

The World Bureau of Metal Statistics reported 2011 was yet another deficit year for demand over supply, and Barclays (quoted by Reuters) says 2012 will be the third year in a row in which demand has exceeded supply.

If mines and refiners remain closed during the third quarter due to prices, expect probable rises towards the year’s end.