The Baltic Dry Index (BDI) usually steals the headlines when it comes to discussion of the world’s shipping fleets, and is often quoted when analysis of the global economy refers to international trade.

The Dry Index is a measure of bulk shipping rates and although the Baltic Exchange quotes a range of vessel sizes and types, it is often the large dry bulk carriers carrying iron ore, coal and grains that steal the limelight.

This is hardly surprising; the volume of such bulk commodities is a measure of global economic activity and the rates charged for carrying such commodities are in part a reflection of the level of demand or volumes. But not in total, of course: the supply of space also plays its part as is the case in the current market.

Baltic Dry Index rates for shipping bulk commodities are way down on a year ago, as seen in the graph below: 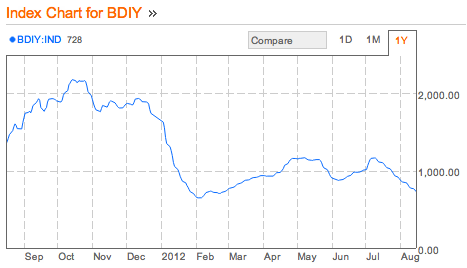 After a brief rally in the spring, rates are back to post-crisis levels, but in large part this is due to a dearth of new vessels ordered during the boom period in the middle of the last decade and not wholly the result of a collapse in trade.

According to Reuters, the index this week has fallen for 26 straight days in a row. The average daily earnings of capesize vessels, which usually transport 150,000-ton cargoes such as iron ore and coal, slid $173 to $3,590. It has fallen almost 87 percent so far this year. So to what extent are the very low BDI rates a reflection of a global trade malaise?

If bulk trade is down, we would expect all trade to be down; if emerging economies are not buying as much raw material it is probably because they are not producing and exporting as many semi-finished goods (think China) and in turn, mature higher-tech markets are not exporting finished capital goods (think the US and Germany).

While bulk commodities reflected by the BDI are shipped in bulk carriers, higher-value goods tend to be shipped in containers. Here a Telegraph article paints a dire picture of the state of the container market. The true picture is confused by the same issues as the bulk carrier market, namely overcapacity, but the ramifications could be more serious than for bulk products.

Firstly, the current position — the article indulges in a certain level of Schadenfreude, as the Germans may say, focusing as it does on the misfortunes of the dominant German container shipping industry relative to the Greek ship owners who appear to be benefitting at the former’s expense.