The Association of Mineworkers and Construction Union (AMCU) is promising higher wages and better conditions for South African miners willing to move from the National Union of Mineworkers (NUM) to their growing ranks.

To what extent they are really interested in workers’ welfare rather than growing their own power base is debatable.

The readiness to put workers in the line of fire to stir up emotions suggests this has more to do with a turf war among unions than a heartfelt desire to look after miners and their families, but it is the seething cauldron of discontent with which the government, mining companies, workers and ultimately the market are going to have to contend.

Platinum was supposed to be the jewel in South Africa’s precious metal crown. Citigroup has estimated South Africa’s platinum group metal (PGM) reserves are worth over $2 trillion and the sector is said to hold 80 percent of the world’s known reserves, yet platinum is trading at a discount to gold compared to a premium in the 90s. 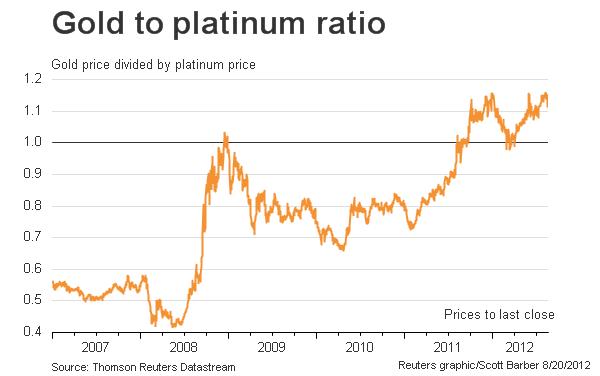 One problem is that the metal is heavily exposed to the diesel-focused, sluggish European car market. According to Reuters, diesel vehicles use a higher loading of platinum than the exhausts for gas engines favored elsewhere.

“We are forecasting a 122,000-ounce surplus this year,” Citigroup analyst David Wilson is quoted as saying. “Lonmin were producing 60,000 ounces a month so if they were out for two months, that would bring the market back to a balance.”

The firm is said to produce 12 percent of global output, so the strikes are increasingly significant as time goes by. In the short term, the turf war between the NUM and AMCU will set the agenda.

However, in the medium- to longer term, instability is going to come from the marginal profitability of a sector with rapidly rising power and labor costs and a global market relying on such a small production base.