It is a source of delight to aluminum buyers and, let’s be honest, consternation to distributors and investors, that the aluminum price continues to slide inexorably lower.

Why would distributors care, you may ask?

Because a sliding price saps demand; customers don’t buy in volume if they think the price next month will be lower than this month; and the supply chain doesn’t re-stock when prices are sliding downwards, so distributors who have to buy in production units are required to carry inventory that is gradually declining in value month by month.

Meanwhile, analysts have been talking for months about how many mills are digging deep into the cost curve — particularly in China — which is seen as the key to achieving meaningful global capacity reductions.

The article points to recent figures to suggest we may be seeing the start of shutdowns. According to the International Aluminium Institute (IAI), quoted in the article, global run-rates fell by an annualized 940,000 tons in July relative to June, but coming as it did on the heels of a record all-time high in June of 45.2 million tons annualized, it may be too early to call the trend as having turned. 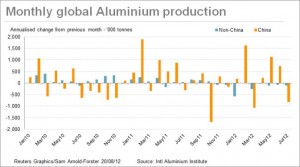 Most of the July fall in production came from China, where annualized run-rates fell by 826,000 tons, but as Chinese production has fallen in July relative to June in three of the last four years, this is just as likely to be a seasonal drop than the first sign of a cutback.

June’s cutback was the first decline in China’s output since March, but follows a cumulative 2.1-million ton increase over the course of April, May and June. Nor is there any hint that China’s support for what they see as a strategic industry is failing.

As Reuters points out, analysts at AZ China estimate that provincial governments are propping up around a quarter of domestic production, something like five million tons, through power subsidies.

In addition, the idea of central government support is back on the agenda, with smelters lobbying for a revival of a scheme to buy up surplus metal as last seen in 2009, when the State Reserves Bureau bought 590,000 tons of metal at above-market prices to support major producers.