Home | Metal Prices | Where Graphite Prices Are Headed, And How China Is Involved
Market Analysis

Where Graphite Prices Are Headed, And How China Is Involved

Although it may take the yeasayers’ hopes (that electric-car charging improves) a while to come true, savvy market watchers and analysts such as Ron Struthers are bullish on graphite.

When asked by The Critical Metals Report if the growth in electric vehicle- and green-energy markets was enough to support the market, he responded:

“Yes, I think so. The markets graphite is used for are expanding significantly. The electric car could be critical. Although we have not yet seen it in the US or Canada on a large scale, electric cars are really big in China, which is now the world’s largest auto market. Some 50 to 100 companies are developing electric cars, electric bikes and electric golf carts. Again, it is such a small market that one or two new graphite mines could create a situation where supply gets ahead of demand for a while and prices come down.”

Graphite flakes are the key form of sellable graphite on the market, and current prices range between $2,500 and $3,000 per metric ton. 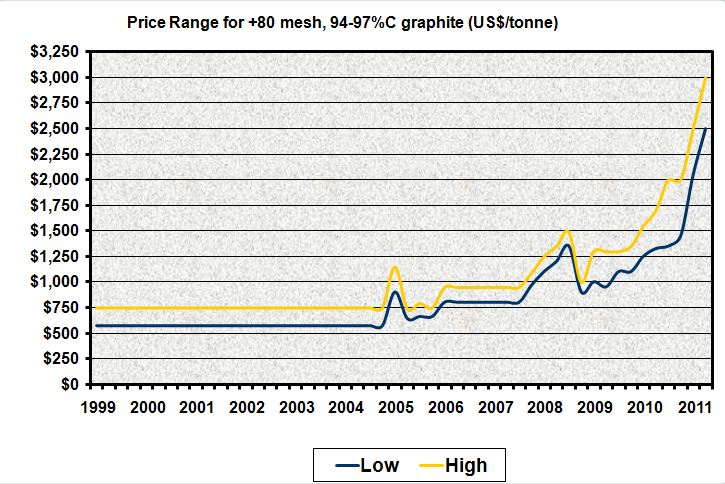 This could only go higher, because North American production is not keeping up with China’s loosening of export controls.

In that way, the graphite market acts much like the rare earths market, and prices will be dictated in the next decade or two by China and its policies. Many analysts worry that China will only tighten controls on graphite export, while others look to the recent WTO move on rare earths export restrictions as a guide for easing this approach.

Mostly, the concern is that China will be closing graphite mines for environmental reasons. According to a report by Industrial Minerals, the Chinese government is keen on consolidating the domestic graphite industry and plans to reduce the number of graphite mines in Hunan province from 230 to around 20, with greater government supervision to reduce the environmental impact of harmful mining practices.

This could lead to a global loss of around 100,000 metric tons of graphite per year, or approximately 10 percent of global supply.

Well, no wonder the stock of Focus Graphite shot up.

Keen investors such as Dr. Sheep will have to keep an eye on these junior miners and on global demand for items such as battery-driven cars, computers and other high-tech applications, to brighten up their days — and their investment accounts.