It seems whatever Australia does, it comes out well.

Hitched, as the Economist says, to the China wagon even as the Asian economy cools, Australia is still sitting pretty. So enduring have the lucky country’s fortunes been, that the Aussie dollar has become a safe haven currency, trading above the US dollar since early last year.

In spite of falling commodity prices, on which the Australian economy depends, the currency has risen 10 percent since June. According to the Economist, central banks and other foreign investors pouring money into Australian dollar assets are largely responsible. Foreigners now own nearly four-fifths of Australian federal government bonds. They are turning what was once a “commodity currency” into a safe-haven one.

However, not everyone is happy.

Manufacturers have suffered as they can no longer export goods competitively. The report states over 100,000 jobs have been lost from manufacturing since the start of 2007, in an economy of only 11.5 million employed persons, according to the Australian Bureau of Statistics. Still, as jobs are lost in manufacturing, they are added in mining and energy, resulting in an unemployment rate of just 5.2%.

In July, Australia notched its 21st year without a recession, an incomparable record to any other developed economy; at the same time, moving in the opposite direction from all other mature societies of mineral wealth to high-tech manufacturing, Australia’s gone the other way. No end appears in sight: even as iron ore prices fall, investment is flowing not just into mining (up 70 percent from last year) but energy, where companies are investing an estimated $189 billion in LNG projects, again mainly for Asia.

But what of those metal prices? This month BHP Billiton, Australia’s biggest company and one of China’s main suppliers of iron ore, reported a 35 percent drop in profit to $15.4 billion for the year to June. It also delayed a $20 billion expansion to a copper and uranium mine at Olympic Dam in South Australia. 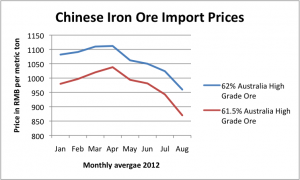 As the graph from MetalMiner IndX℠ data shows, iron ore prices in China have fallen since the spring, down 30 percent in just the last four months. Yet volumes have continued to rise. Last month China imported 56 million tons or ore, up 6 percent on last year even as demand slows, manufacturing PMI are down and finished steel prices plummet.

According to the Financial Times, the price of steel has dropped to levels last seen three years ago in China. Analysts at Nomura are quoted by the paper as saying, “the recent collapse in steel and iron ore prices suggests to us that we have reached the point in the cycle where a major destock is required, if production is not cut voluntarily, imbalances will continue to build, increasing the risk of a large, involuntary cut in steel production.”

The paper went on to quote the China Iron and Steel Association, which said domestic steelmakers saw profits plunge 96 percent in the first half compared with a year ago, turning the industry into a “disaster zone.”

The pressures building in China’s steel sector do not bode well for Australian iron ore producers, but the region’s insatiable demand for LNG will at least ensure high levels of foreign investment continue to flow into the country for years to come.

As ever, there are winners and losers, but overall Australia remains true to its name as the lucky country.