Surprisingly, since the 1960s, the US economy has undergone seven business cycles, averaging 75 months, while the presidential cycle, by definition, runs to 48 months, yet no usefully predictive link between the two has been found.

Stevenson voices a popular perception that as the Republican Party is pro-business, supports lower taxes and favors smaller government, a win for the GOP should be better for stock markets; but again the evidence points the other way.

Over the past 12 terms, the average annual market return has been around twice as high under the Democrats as the Republicans. 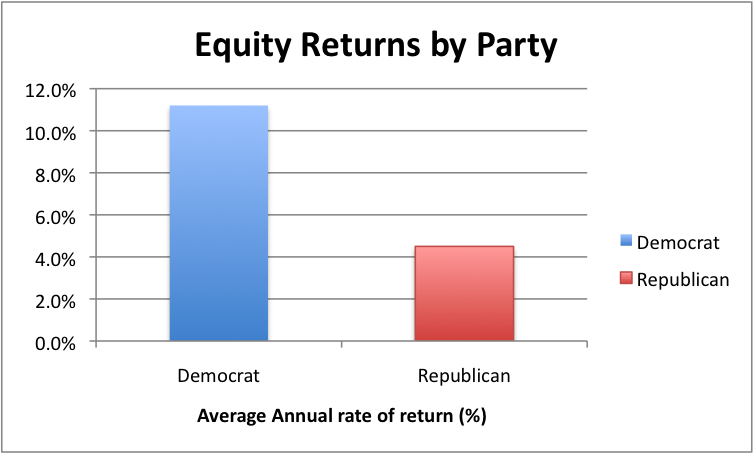 What about after the election? Here, the evidence suggests that investors should, in the short term at least, be rooting for an Obama victory.

Stevenson states that history shows markets tend to rally after a win for the incumbent party by more than 10 percent on average, but fall modestly if the challenger is successful. Looking over the whole subsequent presidential term, the first year has tended to be strong when the Democrats have won, but weak for the Republicans, with the same effect in evidence in the second year.

By year three, there is no difference between the two parties and it tends to be the strongest year by a wide margin. Interestingly, and for other reasons mostly to do with a recovery in Europe, many observers are suggesting strong global growth may not return much before the same 2014/15 period.

More sobering perhaps is the article’s closing thought: that whoever wins in November, the biggest challenge will be tackling the US’ yawning budget deficit without clobbering an already fragile recovery.

Do nothing and automatic tax increases and spending cuts – the “fiscal cliff” – will kick in, knocking up to 4 percent off GDP, according to the Congressional Budget Office.

Not to mention the impact on the rest of the world…now that really does get our attention on this side of the pond.