Quantitative Easing Here Again, Copper Prices Up – But What About Forecast?

This past Tuesday, Jason Schenker of Prestige Economics led off a panel with a forward-looking tidbit.

“Here’s something you should know: copper prices will move hard and fast on Thursday,” he said.

“In which direction, well, that’s the part I can’t tell you.”

With the benefit of hindsight, we can now see that copper prices indeed spiked: 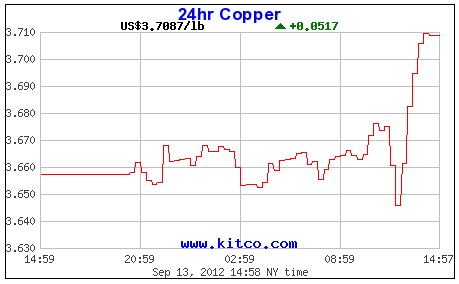 Why? The catalyst Schenker was alluding to was the Federal Reserve Open Market Committee’s statement and subsequent speech by Fed Chairman Ben Bernanke yesterday announcing a third round of quantitative easing — QE3.

Investors, clearly hoping that the monetary boost will do what the Fed is promising — more jobs, leading to greater demand — helped copper hit a four-month high. (Tin and zinc dropped, while aluminum inched up.)

So Schenker called it, not that QE3 was a long shot, but what does that mean for the market looking forward?

As far as Prestige Economics is concerned, not too much. Demand and prices will still be sluggish for the remainder of 2012, Schenker said, but 2013 would see improvement. His forecast puts the copper price above $4.00 per pound next year, $4.05 on average.

Of course, what China does is almost of greater concern. “Copper still has the China factor, but we’re still in a weak economic cycle,” Bill O’Neill of LOGIC Advisors in New Jersey told Reuters. “I wouldn’t be buying things as related to any sudden optimism for industrial demand.”

INTL FCStone analyst Ed Meir said in a research note quoted by Reuters, that “although previous rounds of QE have helped kick-start some growth in the U.S., the fact that we are once again at the ‘money trough’ is not very reassuring.”

“We will have to see if investors reach the same conclusion in the weeks ahead, particularly if they see no immediate improvement in the macro numbers,” Meir was quoted as saying.

Schenker, and others in the metals markets, see the Fed’s super low interest rates — which the FOMC announced would continue through mid-2015 — as a concern. Take the financing schemes going on in the aluminum market, for example. Rates near zero encourage the warehousing game to continue, obscuring the metal availability picture for buyers.

When asked at the ISRI conference where interest rates need to get to discourage these financing deals, Tim Hayes of Davenport & Co. said, “Substantially higher. Even 1 to 2 percent will not be high enough for financing to stop.”