Oil prices have jumped 30 percent in the last four months, according to an article in the Telegraph, raising fears it says of an increase in inflation just when Asian inflation had come down and the rest of the world was confident inflation would not be a problem before the middle of the decade, if then.

The oil price as measured by the Brent crude quotation was trading around $116.50 a barrel on Monday, boosted by the US Federal Reserve’s aggressive moves last week to stimulate the US economy and worries over Israeli-Iran tensions; this compares with $90 per barrel In June.

Nor is oil the only commodity on the up — base metals have risen strongly of late with aluminum, one of the worst-performing commodities of 2012, on course for its longest rally in 25 years as investors bet that Chinese stimulus and US QE3 plans will shore up demand.

Rising commodity prices would have an unwelcome impact on both manufacturers’ costs and inflation.

Victoria Clarke, an economist at Investec, is quoted as saying she expects a rise in CPI inflation early next year in the UK as a result of commodity (particularly oil) prices.

If she is right, the same underlying dynamics of rising commodity prices would affect the US market. Aluminum prices have spiked dramatically this last week or so, with 3-month LME prices heading for $2,200 per metric ton after languishing at $1,800-1,900 per ton for the last couple of months. 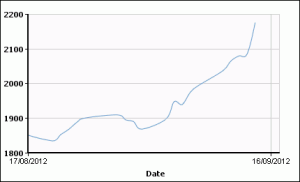 So should buyers rush out to cover requirements forward? If you have spot buys that you can still cover at last week’s, or better still last month’s, average price then yes, most certainly.

But if you are looking at covering next year’s requirement and the price is based on an LME point of $2,200 per ton or thereabouts, think carefully. As analysts at Barclays warn, while prices could climb higher still, without an improvement in the aluminum sector’s fundamentals, such strength would be difficult to sustain.

With voices already calling for release of strategic oil stocks to smother further oil price rises, he adds, “Oil prices should drop back of their own accord as the focus returns to the continued deterioration in economic conditions which makes additional (QE3) stimulus necessary.”

Capital Economics is forecasting Brent to average $85 a barrel next year and we would agree that aluminum north of $2,200 per ton appears unsustainable without significant smelter closures and/or a rise in demand in the rest of the world outside China – neither of which look anymore likely this week than they did 10 days ago before the price started to climb.