It does not seem long ago that we were speaking at a conference on the so-called rare earths in Washington, D.C., and the talk was all about the threat to the Western world of China’s monopoly on the supply of these elements.

In those days, there was great anxiety about the future of a whole range of Western-dominated industries such as advanced electronics, defense, wind turbines and super magnets, to name but a few, if alternatives to China as a source of supply could not be found.

Indeed, it is fair to say that the whole panic over supply served supporters of Molycorp and Lynas by making them appear as more than just economically important, but of utmost strategic national necessity.

Not that we have any issue with that.

After all, it isn’t healthy for any industry to be 95-percent reliant on one country for supply, let alone for such a wide range of high-technology industries. Clearly, support for and encouragement of Molycorp and others was and continues to be welcome.

In the long run, we will look at China choking off supply (ostensibly while they grappled with illegal mines and environmental degradation on a vast scale) as doing the rest of the world a big favor. 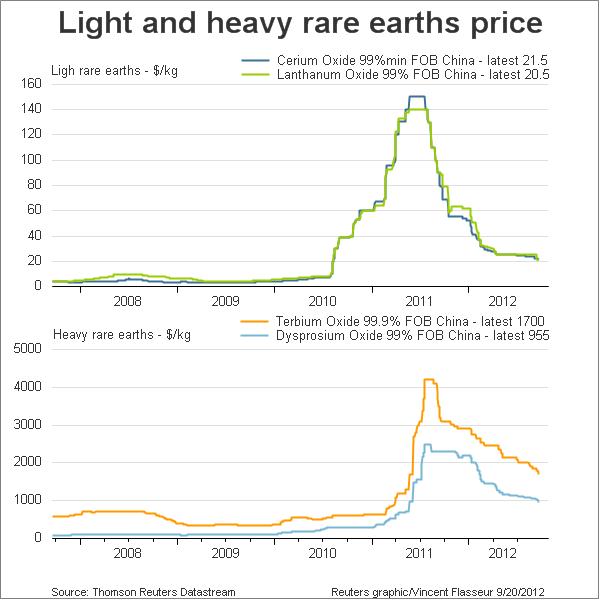 It was hard to see it that way as prices skyrocketed (see the chart above from Reuters), but as the news organization points out, the resulting investment has led to a rising tide of new supply opportunities and prices have quickly come back to sustainable levels.

The greatest movement has been in the lighter rare earths, which are also the most plentiful. Most observers believe they have the furthest to fall, as heavier rare earths will be supported by still-constrained supply.