Japan’s latest QE can be seen in part as another attempt to drive the currency down, but is unlikely to have a lasting impact. 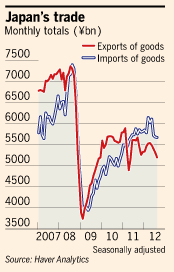 Meanwhile, the current spat with China over the Senkakus (to the Japanese; the Diaoyus to China) islands, risks escalating into a trade war with Chinese officials proposing cutting off rare earth metal exports and worse, with the express intention of bringing on a crisis in the Japanese bond market.

Hopefully no one will be stupid enough to allow the current dispute to get that far, but the very fact that China threatens and the rest of the world listens says something about the proximity of Mr. Tanaka’s tipping point for the economy.

Japan cannot thrive without a return to full generating capacity in the short term, while in the medium- to longer term the country faces a massive investment in alternative energy if it is to truly turn its back on nuclear power.

On the plus side, such investment would act like a stimulus program if the authorities guided much of the work to domestic firms.

Japan has very limited non-mountainous unpopulated land on which to build wind farms, and its seabed slopes steeply, making offshore farms only feasible on floating platforms, which are even more expensive than already costly seabed-mounted wind farms.

Masakazu Toyoda, of the Institute for Energy Economics, is quoted as saying that raising solar power’s share of electricity generation to 8 percent by 2030 would require fitting photovoltaic panels on 80 percent of all new buildings (possible with legislation) starting immediately, plus retrofitting 3 percent of existing homes (possible with incentives) and covering 550 square kilometers of farmland each year (highly unlikely).

With an aging population, Japan has its challenges ahead. How long it will hang onto its safe-haven status remains to be seen.