What happens when the majority of the world’s trade-driving regions encounter economic crises?

Although the grinding and the halting is not as pronounced as it was in the dark days after the 2008 economic crash, the dominoes of economic slowdown are falling one after the other — and the implications for industrial metals markets could be bigger than we’ve experienced in years.

Late last week, the World Trade Organization (WTO) released its current world trade forecast, and it wasn’t exactly rosy. WTO economists downgraded their 2012 forecast for world trade expansion to 2.5% from 3.7% and scaled back their 2013 estimate to 4.5% from 5.6%, according to the press release.

They cited disappointing output and employment data from the US, which is almost equally — though not really — yoked with China’s dour purchasing managers’ indices and industrial production figures, which has a much bigger relative impact globally, as China is the world’s largest exporter.

As shown in this graph, growth has slowed, but could steadily climb. 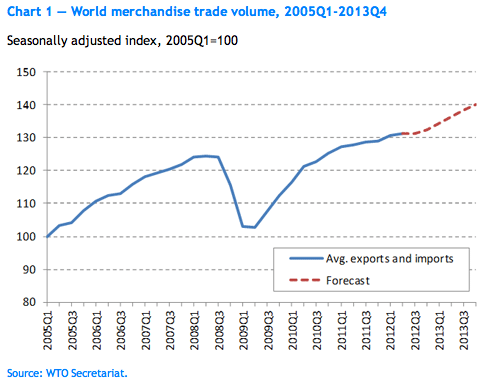 Here’s the caveat to the previous statement, however: the WTO has “strongly assumed” that these two very important “medium-term economic developments” will happen to not “derail” this forecast:

In our opinion, that’s asking a lot.

Of course, the Eurozone political climate would have to deteriorate precipitously for the euro to be thrown out. Several analysts we’ve been following don’t see that as a possibility, as the European states that are in trouble (Greece, Spain, Italy, etc.) will be forced to take deals based on heavy austerity measures, and the big boys (Germany, etc.) will continue to put their foot down.

As for the US, likely not too much will change too quickly, but that doesn’t mean that big metal exporters, such as US steel producers, aren’t concerned about higher corporate taxation and other hindrances to exporting their steel products.

But back to exports, here’s how important Europe’s health is to global-trade growth: the bloc represents 35 percent of global trade weight on a total import/export basis, according to the WTO, and with import demand in the European Union having weakened markedly (imports from the rest of the world are down 3.5 percent), it’s imperative that the EU sovereign debt crisis is resolved to a) turn around an already recessionary economic environment and b) open the Eurozone back up to US/other exporters as a healthy collective consumer. 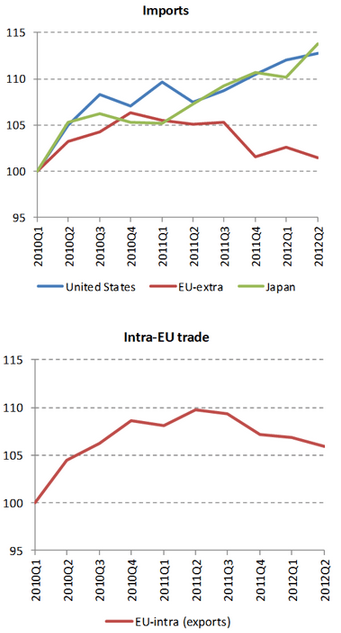 Overall, many individual states in the EU, and the region’s overall economy, have much darker prospects ahead than that of the US economy (even though the likes of UPS and DuPont don’t seem to think so). The OECD recently said the UK economy will shrink by 0.7 percent this year, compared with previous forecasts of 0.5 percent growth, according to the Guardian. “The only G7 member worse off than Britain is Italy, which is expected to shrink by 2.4%,” the paper reported. 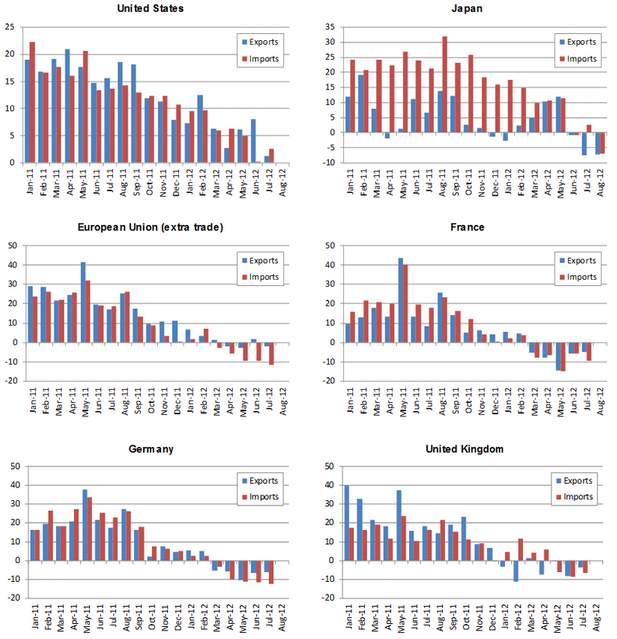 However, Russia’s imports have ticked up in July, and Thailand has experienced rather high import figures in the last few quarters — new end-markets for Western metals exporters, anyone?