A lot of militaristic hullaballoo has come wafting from the East China Sea lately, and all we can really do is sit here in the middle of the US and enjoy the show.

Well, that and ruminate on when these recent goings-on will affect the industrial metals markets.

Recently, the Economist reported that a fleet of Taiwanese fishing boats and patrol ships entered the disputed waters. A skirmish involving water-cannons broke out between Japanese and Taiwanese vessels before the Taiwanese left the area.

A much different type of boat, meanwhile, was unveiled in China. The northern port city of Dalian hosted the ceremony for the 58,500-ton ‘Liaoning,’ the refurbished Admiral Kuznetsov-class aircraft carrier acquired from Ukraine — China’s first. 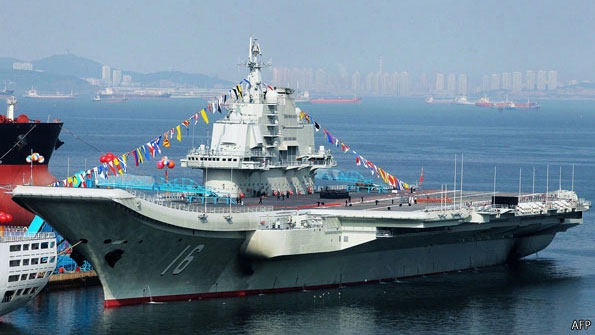 “The military utility of China’s carrier programme is questionable – at least in the context of any future showdown with America. But it says quite a lot about how China sees itself and how it wishes others to see it,” reads an Economist article.

From a geopolitical standpoint, that’s likely to hold true – but what if China’s continued push to boost its military presence also boosts demand for the likes of steel plate, titanium alloys, and other such military-grade metals in the decades to come? Could that take the place of the current priority, infrastructure spending?

Since the early 1990s, China’s military spending has hovered generally around 2 percent of GDP (in 2011, that equated to US $119 billion, according to the Stockholm International Peace Research Institute; other estimates put the figure lower): 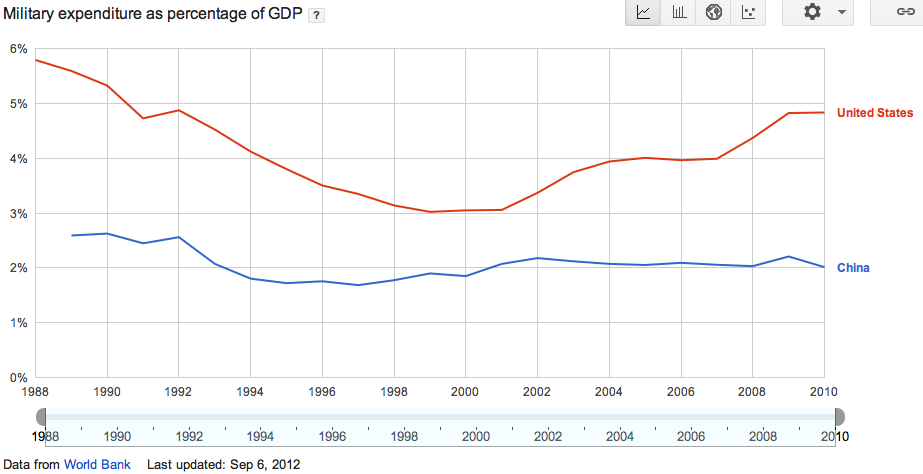 That of the US, in contrast, has gone no lower than 3 percent of GDP (where it hovered back in 2000), and has been on the rise since then, currently approaching 5 percent. In 2011, that equated to $698 billion, according to SIPRI.

We already know that Chinese and other emerging economies’ commercial-plane-buying is driving orders for OEMs such as Boeing; much of aerospace industry is banking (no pun intended) on the demand forecast. With military matters, obviously the metal purchases would principally go towards producing the larger goods (aircraft carriers, tanks, fighter jets etc.) — but not if China keeps buying second-hand, as they did with the Liaoning. (World’s biggest floating scrap purchase, anyone?)

Now speaking to the headline; sure, both clauses play to a bit of hyperbole. “According to one senior Chinese officer, even with substantial investment it could be 30 years before the PLAN will be able to put a carrier battle group to sea approaching the capability of even one of the 11 carrier groups that America currently deploys,” states the Economist. China will only have two more “indigenously-built” carriers by 2015.

That doesn’t bode well for the complementary elements — the jets, the subs, what have you.

The long and short of it is, China won’t touch the US for a while. Even if China truly wants to push Japan around for, say, some small islands, they’ll have to really get going on their military spend.

But hey, to do that takes some metal, people.