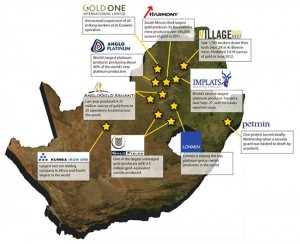 The WSJ blog The Source reported that the CEOs of Anglo American Platinum, Lonmin, Aquarius Platinum and Impala Holdings – an exclusive club of the top platinum producers on the planet – have stepped down, with replacements already in place or on the way.

This may seem bad timing, only because after seven weeks of labor unrest, as many as 75,000 miners, or 15 percent of the mining sector workforce, are already out on strike, while a national truckers’ stoppage is squeezing fuel suppliers.

So far about 50 people have been killed and the strikes are spreading from the original flash point of Lonmin’s Marikana platinum mine that we covered last month. Needless to say, supply- and other risk management should be on the collective minds of these companies’ leaders.

According to The Source, mining analyst Justin Froneman of SBG Securities “said the timing of the CEO change was unfortunate but it shouldn’t result in massive change in terms of organizational strategy or direction for the four companies.” Froneman expects to see aggressive restructuring, the article stated.

Froneman also “noted that the timing of the changes at the helm of the four platinum miners was perhaps also largely coincidental given that several of the CEO had been in their positions for several years.”

That may be, but it still puts another damper of uncertainty on the extremely (of late) volatile platinum mining production industry. The nation of South Africa also has its share of power problems, and mining production relies heavily in turn on electricity production and stability.

Palladium, often mined together with platinum, has also spiked. The price of Chinese palladium bar rose 9.1 percent over the past month, the second straight month of gains. US palladium prices increased 4.4 percent. Get complete PGM prices, updated daily.