Could we be seeing the beginning of the end of the LME billet contract?

It may be a little early to call time on the oft-maligned steel billet contract — it is by some measures the fourth-most traded product in the ferrous space after the Shanghai rebar contract, SGX iron ore swaps and CME’s iron ore portfolio, according to a Reuters article.

And arguably, as two of those at least are raw materials for which physically traded volumes are almost by definition larger, the LME contract could be said to be doing rather well. The main problem, though, is that volumes are heading in the wrong direction.

The main thrust of the Reuters article was looking at the overall growth of traded volumes on the LME this year in relation to previous years — growth that underpins the price paid by the Hong Kong Exchanges and Clearing (HKEx) in their current takeover of the LME.

Although LME-traded volumes across all metals have fluctuated rather alarmingly from a poor August to a bumper September, the overall trend this year is still very positive. Last month’s tally of 14.09 million lots brings the year-to-date total to 119.1 million lots, equivalent to $10.9 trillion in notional turnover.

Nor can volatility from month to month be a surprise; with such a risk-on, risk-off environment and the impact of quantitative easing so influential on market risk appetite, it is hardly surprising.

While the LME notionally trades 11 contracts, three in aluminum and aluminum alloys, plus copper, zinc, lead, tin, nickel, cobalt, molybdenum and steel, over 82 percent of the volume is in just aluminum, copper and zinc, as the Reuters pie chart below shows. 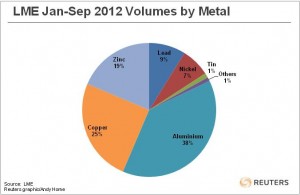 Growth in the large-volume items therefore becomes crucial to the success of the exchange (and to the value inherent in the price paid for the LME). Here the picture is mixed, with aluminum growing at just 1.9 percent, copper at 6.8 percent (boosted possibly by Chinese physical buying prompting investor interest in copper this year) and zinc at 32.1 percent.

The two newest contracts, cobalt and molybdenum, have moved spectacularly in opposite directions with cobalt doubling from 4,646 lots in January to September of 2011 to 10,215 lots in the same period this year. Molybdenum however, launched at the same time in February 2010, saw activity collapse to just six lots last month, a record monthly low after August’s record monthly high of 82 lots.

Indeed, molybdenum traded on only three days over the course of September, raising the question of how much longer it will continue in its current form.

But neither of these contracts are in as bad of shape as LME billet. Continued in Part Two.