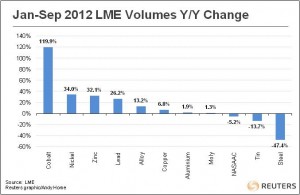 Compared to molybdenum and cobalt contracts, as we laid out in Part One, the loser has been the steel billet contract (see graph above) — loser in the sense that while both steel and molybdenum contracts have declined, steel is the largest globally traded metal and as such, demand for a hedging product should be widespread.

For the LME to have lost traction and be slipping so badly suggests the contract is failing to meet the industry’s needs.

Worse for the LME, competitors are on their heels.

Apart from the Shanghai rebar contract — which is admittedly highly focused on the Chinese domestic market — the CME’s hot rolled steel coil futures contract is growing rapidly in North America. True, it’s up from a much lower base, but growth of 72.4 percent this year suggests it is finding favor among steel investors and the trade.

Volumes have risen from 19,327 lots in 2011 January to September to 33,321 lots this year, some 666,420 tons, and rising. Likewise, although LCHClearnet’s cash -ettled steel swaps for HR Coil for Northern Europe and Southern Europe are only a fraction of the LME billet contract, tonnage volumes are rising fast.

Could this become the de facto steel hedging tool in Europe?

It’s too early to tell, but the volumes are rising encouragingly for the London-based clearer, and HR coil has proved a good base product on which to build hedging structures for other downstream products in North America.

That said, LME steel volumes year to date exceed 6 million tons, dwarfing Western pretenders and showing (for some, at least) that the contract is providing value.

Maybe this is not so much the beginning of the end for the LME billet contract, but the end of the beginning; having established a base of volume, the challenge will be where the LME takes it from here — because arguably it is not meeting the aspirations of its early supporters or the requirements of a wide swath of industry involved in global steel trading.