If the real cost of production for iron ore in China is closer to $70 per ton rather than $130 per ton and iron ore demand is going through no more than a cyclical drop in demand, does that mean volumes and prices will come roaring back next year?

In HSBC’s opinion, prices quite reasonably reflect the reality of a contracting European market, a sluggish North American market and reduced growth levels in most emerging markets.

The bank has slashed its price predictions from just a few months ago by some 27 percent. The bank holds good to growth in Chinese steel demand, pointing to the still-low levels of steel usage compared to more mature markets. 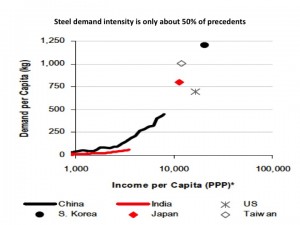 But the substantially lower estimate of Chinese iron ore production costs encourages the bank to believe there is much more room for prices to remain in a new equilibrium around $105 per ton for the next three years.

While this still leaves Australian and Brazilian producers with a profitable margin, it will dramatically impact capital expenditure, a trend we are already seeing with delays in mine expansions planned just a year back and now being postponed or shelved.

Lower iron ore prices will be accompanied by lower coking coal prices, although the more constrained nature of coking coal supplies and the greater dependency Asian mills have on Western suppliers means falls in coking coal prices are not expected to be so great — in HSBC’s estimation, from $210 per ton on average this year to $188 per ton through 2015.