A certain amount of guesswork has been required, but numbers cross-correlated with safer data and backed up by interviews with mine owners in China over recent months suggest the real cost of production is closer to $69 per ton, with the break point at which mine production may be idled at something like $79 per ton.

The argument here is that mines will not continue to operate if they are not making a profit; the resource is finite and owners will likely prefer to leave it in the ground than operate without a margin. This first graph from HSBC provides a visual as to how the cost curve varies with iron content. 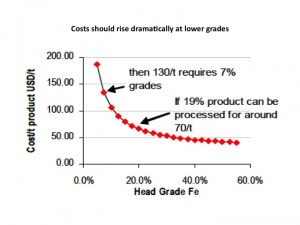 One-third of China’s steel production is produced from domestic iron ore, so when demand falls, the point at which this domestic production is no longer able to meet market prices becomes a crucial factor in setting the bottom for iron ore prices.

While iron ore volumes as reported by the Chinese state have risen dramatically over the last decade, now reported at about 1.4 billion tons, the iron content of this ore has remained remarkable constant at 100-150 million tons, as this graph shows: 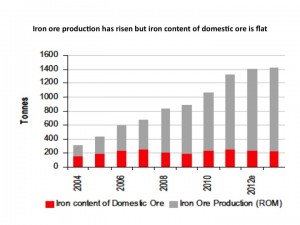 Lower Australian exports reported in recent weeks and the relatively low levels of iron ore inventory at steel mills have been used as evidence to support the picture of an uncertain and weak steel market in China.

While steel prices and iron ore prices have fallen considerably and the outlook for the rest of this year looks to be more of the same, in fact, falling third quarter iron ore inventories are a normal cyclical trend and don’t necessarily suggest steel demand has collapsed. 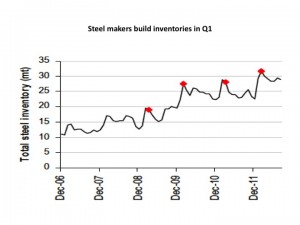 So what of the future?