Iron ore prices have been closely followed over recent years for, among other things, an indication of the health of the Chinese economy and a measure of economic activity.

However, prices of iron ore have been on a slide this year as the Chinese economy has cooled from heady double-digit growth to an arguably more sustainable 7-8 percent per year level. 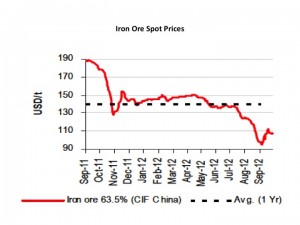 While iron ore prices have fallen, they have found support around $100 per ton, after briefly hitting a dip of sub-$90 per ton. It has been assumed the Asian seaborne iron ore price has a natural floor or support level at the marginal cost of production in China.

When iron ore prices rose to stratospheric levels this was assessed as something like $130 per ton, so logically many had expected as the CIF price fell below this level, the highest-cost mines would be closed in China, boosting imports and supporting prices paid to Australia, Brazil and India.

Indeed, many small mines have been closed this year, but the total loss of production has been small as larger, more efficient mines have continued. This floor price assumption is a key factor in predicting future iron ore pricing, so HSBC’s recent analysis of Chinese production costs is a timely piece of work, providing some much-needed transparency on an area where hard statistics are almost non-existent.

Not that the bank would claim their numbers are exact.