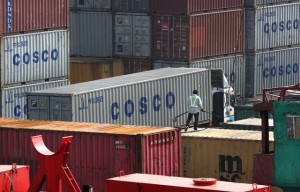 Greece is in a difficult situation — no doubt about that.

Pictures of the public rioting on the streets paints a scene of a population driven to extremes by hardship and rightly generates considerable sympathy.

But there is another side to this story, one the Germans in particular have come under a lot of criticism for focusing on so resolutely, and that is of a country living beyond its means.

The tragedy is the current youth and young adults entering the workforce will share in the pain that has been visited on them by previous generations. An interesting article in the NY Times serves to underline the gap between where Greece is now and where it needs to be to pay its way in the world and compete on the international stage.

Make no mistake — as this article shows, Greece can compete, but to do so there will have to be cultural, legal and social changes of some magnitude.

The article explores the contrasts between the two halves of Piraeus Port. As the Times explains, in 2010 Cosco, a Chinese state-owned shipping line, paid 500 million euros ($647 million) to lease half of the port of Piraeus and quickly converted a business that had languished as a Greek state-run enterprise into a hotbed of productivity.

By contrast, the other half of the port is still run by Greece. And the fact that its business lags behind Cosco’s is emblematic of the entrenched labor rules and relatively high wages that have stifled the country’s economic growth.

Cosco’s side of the port has doubled container traffic since 2010 to 1.05 million units and the firm is investing $388 million to lay a second pier and modernize its docks to handle 3.7 million units next year. When completed, Cosco’s side will be one of the 10 largest ports in the world.

The differences between Greek side and Cosco side by the numbers? To be continued in Part Two.