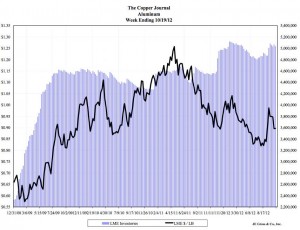 The case for the aluminum market is one of short-term gain, long-term pain.

A Reuters article paints a fairly positive picture of an industry not so far from balancing supply and demand as is generally believed, but an industry in which spot premiums are dissuading producers from taking steps to close the gap. We’ve explored this gap before…

Of course it’s not quite as simple as that, as a little more explanation will make clear. First, the traditional case for a market seriously in surplus.

Click below for the rest of the story, including an exclusive MetalMiner video interview with the Aluminum Association’s Heidi Biggs Brock.

HSBC bank, in a recent quarterly report, estimates aluminum capacity to be 1.5 to 2 million tons per year in surplus, with exchange and non-exchange inventory to be circa 6.7 to 7 million tons.

Reuters, on the other hand, quotes Steve Hodgson, head of international sales at Russian aluminum producer Rusal, who says but for the physical premiums available to spot sellers, between 2.5 and 4 million tons of capacity would already have closed, yet Rusal puts the surplus at only 300,000 to 400,000 tons.

Underlining how important this physical premium has become, Rusal has just announced all their contracts will henceforth incorporate a floating element to capture the physical premiums prevailing at the time of delivery.

Hodgson suggests 10-15 percent of the industry is being kept profitable by these physical premiums alone. Taking this to its logical conclusion, that means the likes of Glencore, JPMorgan and Goldman Sachs, whose control of the LME warehouse network (in large part causing this availability squeeze) are keeping a number of Western producers afloat and imposing higher prices

on consumers everywhere than would otherwise be the case.

Whether you take Rusal’s view of surplus or HSBC’s is probably academic — they both agree the market is in surplus and will likely remain so for the foreseeable future.

Indeed, the risk is if anything to the downside inasmuch as increased availability – from increased Chinese exports, a deeper recession in Europe, the US failing to resolve its budget negotiations and incurring the “fiscal cliff” penalty or a collapse in the forward premium supporting the stock and finance plays – rather than to the upside.

If Rusal is right (and we have our doubts about these numbers), it would not take much capacity to be closed to achieve balance; ironically, if that were to happen, the forward curve could flatten sufficiently for the stock-and-finance plays to slow or even cease, easing the physical premiums and resulting in more capacity being idled – a potentially self-feeding spiral.

Here’s an alternate viewpoint on US aluminum capacity, from Aluminum Association President Heidi Biggs Brock, interviewed by MetalMiner at Aluminum Week in Chicago:

Still, mills have been talking about closing capacity for months, if not the last couple of years, with only relatively isolated instances of whole plants being idled. While the premiums remain (and moves like Rusal’s will enable them to capture those premiums more effectively), there is much less incentive for producers to cut capacity and the divergence between the LME price and physical price as displayed by the Midwest Ingot price will continue.

Short-term gain via the physical premium, long-term pain via overcapacity.