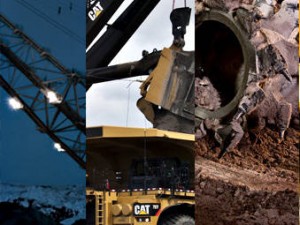 Caterpillar, the US multinational manufacturer of mining and earth-moving equipment, is often touted as a bellwether of the global manufacturing sector, leading some to think that if news comes out of Caterpillar’s fortunes being down, then the whole global economy must be down.

In reality, Caterpillar’s position in this respect is more subtle — and therefore valuable — as an indicator than it first appears.

While the global economy fell into an abyss in late 2008, Caterpillar’s prospects seemed to follow in close order, but the firm quickly responded to the downturn and the firm has been doing well during the last two years, in spite of a global economy with few bright spots outside of China.

Now though, the firm warns in its third-quarter financial figures of a reduced forecast for full-year revenues to $66 billion from an earlier range of $68 billion to $70 billion, according to Reuters.

The drop in sales is put down to slowing growth in China and Brazil, and the possibility of a recession in Europe. This year, however, has turned out better than one might expect from reading the popular press, which is mostly marked by a depressingly negative tone.

Net profits at Caterpillar were expected to be 49 percent higher from last year to $1.7 billion, on revenue up 5 percent to $15.7 billion. Earnings per diluted share also rose 49 percent, to $2.54.

However, the firm is making cautionary noises. Some factories are being idled and staff laid off in expectation that the slowdown in China will continue and amid uncertainty over lawmakers’ ability to agree on budgetary issues after the election and the corresponding possibility the US may hit the so called “fiscal cliff” of enforced budget constraints and tax rises.

Caterpillar’s Results and the Mining Sector

What do Cat’s results tell us about global mining? Well, sales are up 9 percent in the US as the housing market is believed to have bottomed and construction activity has finally picked up. Sales to the mining sector overseas, though, continue to look weak as capital expenditure is postponed.

Both extensions and greenfield mining projects are being delayed and cancelled as miners find it tougher to justify the financial conditions following steep falls in commodity prices. The outlook for most metals-based mining projects, with the possible exception of copper, looks much less certain today than it did twelve months ago and many major projects have been put back as a result.

Caterpillar’s numbers reflect this hesitancy and the understanding this will translate into lower sales in 2013. The firm is suggesting 2013 numbers will be much the same as 2012, with some construction growth in the US offsetting slower emerging market growth and Europe continuing to flat line as it has done this year.

It will be interesting to see if Caterpillar has this right, or if the ongoing weakness in the mining sector undermines sales further than anticipated. With little likely to lift metals prices or raise demand, the risk for further capex weakness is likely on the downside more than the up.

A repeat of this record year therefore seems like a Big Ask, even for a firm like Caterpillar.