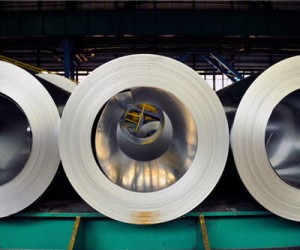 The supply demand outlook for nickel remains highly uncertain — banks and analysts at least agree on that.

Many believe nickel demand, having slumped this year, to have bottomed and that the metal could post a modest upswing next year.

HSBC reports that China posted practically no growth (+1.4%) in stainless steel production (by far the largest market for nickel) in 2012, but is expected to pick up in 2013.

Stainless steel production was actually down in Europe and the Americas this year, but a lower nickel price encourages the use of nickel-bearing steels and in particular austenitic grades, a trend that has seen the ratio of austenitic to total stainless grades increase from 72.1 percent to 73.3 percent during this year.

For more analysis and a nickel price forecast, click below.

Although smaller in total demand, the increase in nickel use from non-stainless applications has increased the most rapidly, by 8 percent this year.

Taken as a whole and against the backdrop of slowing global GDP growth, even outright recession in some quarters, nickel demand has held up reasonably well responding to the stainless cycle rather than directly to GDP trends.

The swing factor has been and will continue to be nickel production. New mines have faced a number of challenges, cumulatively reducing the expected contribution they will make leading up to the middle of the decade. An interesting graph from HSBC shows how estimates have been progressively reduced over the last 12 months by some 20 percent: 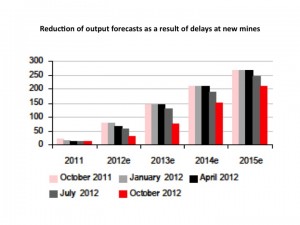 The second major source of nickel supply, Chinese nickel pig iron (NPI) has held relatively steady in spite of an Indonesian ban on exports this year and increased export duties on nickel ore. China has substituted almost the entire quantity imported from the Philippines, although the higher costs of lower grades will likely impact some production in H2 this year and next.

As a result, China may shift to importing more refined nickel than relying to the same extent on NPI next year. HSBC certainly believes increased Chinese demand will help lift prices next year and forecasts prices to rise from an average of $17,920/ton (estimated) this year to $18,740/ton in 2013.

In addition the bank estimates both rising cost pressures on Chinese nickel pig iron and from higher-cost new mines will underpin prices going forward, resulting in prices rising to $20,000/ton in 2014 and $22,000/ton in 2015.

However, most sources agree the market will remain in surplus. The World Bureau of Metal Statistics puts the figure at 77,000 tons for January to August this year, Standard Bank estimates this year as a whole at 48,000 tons and next year at 35,000, but HSBC believes the market is much more in balance, predicting just 7,000 tons this year and 25,000 in 2013.

Interestingly, Standard Bank in a Bloomberg article speculates nickel could be a candidate for similar stock-and-finance plays to aluminum and zinc. The metal’s forward curve is in contango, benefiting from the surplus supply situation.

Presently, physical premiums for cut cathode are low, suggesting Standard Bank’s speculations have not yet caught on. Nevertheless stock-and-finance, if it takes off, remains yet another risk to nickel premiums for buyers to watch out for, as if they didn’t have enough variables already!