It doesn’t seem like five minutes since we were all panicking over the rise in rare earth metal prices and fretting about the strategic risk to the Western world of China’s decision to limit exports, ostensibly on the grounds they had to tackle rampant illegal mining activities and the associated environmental degradation — but the conspiracy theorists couldn’t help themselves from the “China wants to dominate the REE market” argument.

Well, just a couple of years on, rare earths prices have been falling steadily, both in the West and domestically in China, as this graph of just two rare earth metals prices reported daily on the MetalMiner IndX℠ shows. 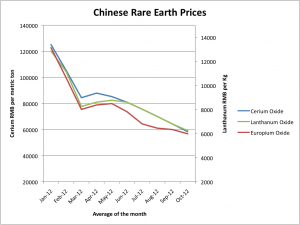 A recent article in Resource Investing News reports on Reuters’ announcement that Inner Mongolia Baotou Steel Rare-Earth, one of China’s leading rare earth producers, has halted production at some of its smelting and separation operations in an effort to stabilize slumping prices.

The decision to suspend operations was made in late October and is expected to last one month. Earlier in the week, Reuters is reported to have said the group’s third-quarter profits plunged by 90 percent over the same period last year. 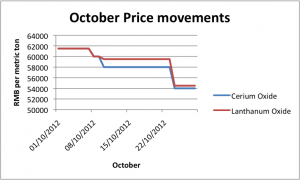 Moves over the last month have, if anything, been even more pronounced, as the above graph from the MetalMiner IndX℠ shows.

Both cerium and lanthanum oxides have dropped by 10 percent or more in just the last four weeks. Is this good news for rare earth buyers?

Well, yes, in the short term it is. Of course, lower prices will encourage more innovation and uptake of rare earth metals for new technologies, just as skyrocketing higher prices encouraged firms to try to find alternatives.

Should prices fall too far, however, we may be back to the 1990s and earlier in the last decade where the economics of Western sources was undermined. We are not there yet by any means, and it is encouraging to see major Chinese producers cutting back production to support prices rather than flooding the market with ever-lower-priced material as in the past.

It adds credence to the Chinese argument all along that low-priced uncontrolled production, often unlicensed, did China more harm than good and the steps in recent years to centralize control under more responsible state organizations was the real objective of export curbs and restrictions.

It will be interesting to see if the Chinese can, as the largest swing producers, be able to stabilize the market by balancing supply. It’s probably in all our interests that they do.