Despite rapidly deteriorating US grain-oriented electrical steel (GOES) surcharges, as well as still-falling HRC prices, many would expect the MetalMiner monthly GOES index reading to decline — but instead, it climbed 10.5 percent, moving from 228 back up to 252 (at or near August 2012 levels).

Just last month, MetalMiner reported that buyers here in the US believed prices could still fall anywhere between 10 and 30 percent.

The MetalMiner GOES index includes a myriad of elements that comprise the index. In fact, we constantly examine not only the underlying metals such as HRC and domestic surcharges, but also global trade data. And here, we see quite a different story – one in which the average GOES price increased considerably from multiple countries. 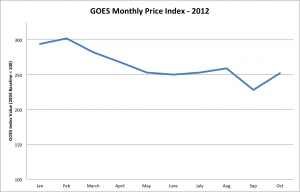 MetalMiner recently published a story covering a “growing concern over the substantial increase in imports of grain-oriented electrical steel (GOES) in 2012,” according to the Specialty Steel Industry of North America (SSINA).

MetalMiner reported that the finding of increased imports (by volume) indeed had risen over 2011. SSINA indicated four countries of concern: Japan, Korea, Poland and Russia. But based upon a recent MetalMiner analysis of pricing, both Japan and Korea had average values higher than US GOES prices and three of these countries — Japan, Poland and Russia — all had higher average prices on a month-to-month comparison (September to October 2012).

In other words, the price trend has gone up, not down, and both Korea and Japan have higher average GOES prices than the US. From our non-legal viewpoint, we find it difficult to conclude dumping has occurred.

So what explains why some countries’ average GOES prices have increased this past month (e.g. Korea and Japan) while domestic GOES prices appear to have fallen?

A MetalMiner reader suggested we take a look at the new DOE (Department of Energy) Distribution Transformers Rulemaking scheduled for release by Oct. 1, 2012, (the Oct. 1 date came as a result of a legal suit with the DOE), but to date the DOE has yet to release the rule.

More specifically, the rule would require the use of higher-performing steel, and therein lies the rub. Industry participants have told MetalMiner that DR (domain-refined) GOES from Japan performs 30 percent better than US-equivalent product. The only other domestically produced alternative product, Amorphous, can work, but capacity remains extremely limited and not enough material capacity exists within the US to service the [new] requirements.

Japanese material comes into the US at a premium to domestic GOES. And though some observers note the US market may become a “bloodbath,” we see price support particularly in light of these potential rule changes.

We will continue to follow this story, and we welcome reader comments and feedback.