Zinc: One Bright Spot Among Base Metals

Almost uniquely among the base metals, analysts are predicting zinc has significant upside price potential next year, in spite of the metal’s close correlation to GDP. HSBC advises that refined zinc output has dropped in response to softening demand, but as a result, prices have remained relatively stable in spite of rising exchange inventory: 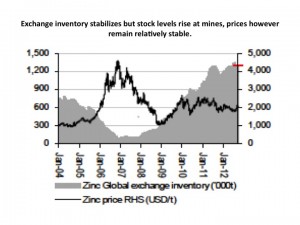 The World Bureau of Metal Statistics correlates the position with regard to production, saying global production of refined metal fell by 3.1 percent this year on the back of lower global consumption.

However, with treatment charges rising fast in H2 (admittedly from record lows) the incentive for smelters to raise production is considerable and posseses a potential threat to refined metal prices. TCs will average about $190 per ton this year, but are expected to rise to $230 per ton next year.

Smelters, particularly in China, have managed capacity by scheduling maintenance in the run-up to the 2013 benchmark setting. So far discipline has been good, but with higher TCs available smelters may be tempted to run higher production rates next year. So solid has the smelter position been that China has imported record amounts of refined metal this year, mostly from other Asian countries.

But it is possible this indicates that not all the metal is being consumed by end users; speculators may prefer duty unpaid metal from abroad rather than more expensive domestic production.

Ore supply is plentiful and indeed, although a squeeze is expected in coming years as some major mines come to the end of their life – Century, Brunswick, etc. — HSBC expects other mines to raise output to bridge the gap. Certainly Chinese production has been rising fast, up 27 percent year-on-year, and is ensuring plenty of ore with any squeeze induced by the smelters at the refining stage.

PREVIOUS POST:
Novelis: Hindalco’s Best Growth Bet
NEXT POST:
What Glencore, Xstrata Have To Do With the Zinc Price Forecast