Following up on our article earlier this week on the state of the zinc market, it was interesting to read Andy Home’s article in Reuters exploring the gradual distortion of the zinc market by financiers’ stock-and-trade isolation of zinc stocks in the same way the aluminum market has been distorted in recent years.

As his article explains, this stock financing trade requires the investor to simultaneously buy near-dated and sell far-dated metal on the exchange, “earning” the difference in price as a profit. From this has to be deducted storage costs, financing and insurance to leave a net profit.

In an environment of ultra-low interest rates, the finance cost is negligible, but Home identifies two other prerequisites to make this model work.

The first is a market surplus of metal and the second is a strong-enough forward contango price curve that the difference between spot and forward price leaves a workable difference.

There is certainly a market surplus, according to the International Lead and Zinc Study Group as reported by Reuters, which predicts a surplus this year of 153,000 tons rising to 293,000 tons next year. Our own article quoted the WBMS, which recently reported the market in surplus by 217,000 tons January to August of this year alone.

The third and maybe most crucial element is a decent forward price curve. While zinc has been in contango, the forward curve has not been especially strong this year, but as this helpful graph illustrates, that is changing fast: 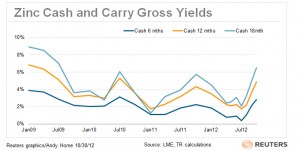 The contango is widening sharply and Home feels it’s strong enough to attract the financial community to get involved. On cue, 250,000 tons of zinc have been cancelled from the LME’s New Orleans warehouse over three days in mid-September; given the state of the zinc market, it is unlikely this is going for industrial consumption — particularly around New Orleans.

So severe has the demand from the financial sector been for aluminum, that real consumers have had to pay ever rising premiums to ensure access to physical metal.

So far, this effect has been muted for zinc, although the Reuters article points to rising premiums in Asia; this could also be due to increased demand from China for refined metal as the local market has turned from refining home-produced ore to importing refined metal mainly purchased from other Asian smelters.

If this trend of increased financial involvement in the zinc market continues, the impact on zinc prices and availability could be significant.

One effect could be to further influence the production of refined metal by the rise of physical premiums, even if the underlying zinc price remains at current levels. As we reported in our previous article, zinc is developing a rising surplus of unrefined concentrate rather than refined metal; to what extent higher physical premiums for refined metal will change this remains to be seen.

As with aluminum, one can’t help feeling the most likely beneficiary of any distortions in the market will be the financial players rather than end users.