Unfortunately for miners, capital investments are measured in tens of years, whereas markets can change in just one to two years.

It was only early last year that thermal coal prices were at a post-crisis high of over $140 per ton. 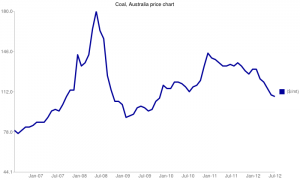 Now, as this chart from mongabay.com shows, they have fallen steadily and indeed, since July have continued to slide — currently below $80/ton for the first time in three years.

The trend is not expected to continue, as so many coal miners are losing money that capacity is being closed to stem losses, but it would not take much for prices to even go below the pre-2007 lows of $78/ton.

Recent deals have been done at $79 and even hard coking coal prices have fallen to a two-and-a-half-year low of $170/ton.

Most coal exporters — but particularly the Australians — are feeling the pain of weak demand and low prices. According to an article in Reuters, there have been several structural changes in the (once dominant) Australian coal industry that have made it less competitive.

Firstly, the balance of the global energy industry has changed with cheap shale gas in the US substituting coal for power generation and stimulating a flood of US coal exports.

Record exports of 125 million tons, according to Reuters, have had a depressing effect on prices in an already weakening global market.

Secondly, the Australian dollar (as we have written on before) has benefitted from strong GDP growth and safe-haven status, boosting its value against the US dollar and other currencies. In Australian dollar terms, Newcastle thermal coal prices recently fell below their 2008-09 lows and are at their weakest in more than five years.

Meanwhile, costs have not fallen in line with prices. Engineers and contractors laid off from mining are being snapped up by LNG projects, keeping labor and equipment costs high.