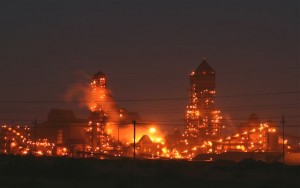 Kumba Iron Ore Ltd (KIO) itself has been caught up in the miner-strike agitation we referenced in Part One.

Today, KIO’s production line may have indeed been switched on again, but the impact on its overall output after 200 workers struck — refusing to leave its Sishen operations in the Northern Cape, and seizing 3.3 billion rand (US $376 million) worth of mining equipment — remains to be worked out.

Because of the KIO strike, one of the world’s leading steelmakers, ArcelorMittal, recently claimed it had to cut down output at its Saldanha steel works. This could dampen its South African situation because ArcelorMittal South Africa expects to spend 380 million to 400 million rand on capital expenditure during the quarter.

According to one report, Kumba had so far lost 2.2 million tons of finished products as a result of a two-week strike at its Sishen mine. The company is still trying to ramp up production because attendance in the mine remained below 50 percent.

The company reported export sales of 10 million tons for the quarter ending this September, which was a 9 percent year-on-year increase, but a 6 percent decrease on the second quarter’s export sales.

The Sishen mine production increased by 3 percent quarter on quarter, to 9.8 million tons in the three-month period ending this September, but this was 7 percent less than the production in the same period last year. KIO has sought to shore up its production by ramping up its operations at a nearby new mine at Kolomela faster than planned.

If the South Africa-India story does not face any hiccups due to the mining unrest, then things will be on course for probably record import figures from South Africa by the end of March.

But if the script does start to go awry from here, Indian steel manufacturers may have to start looking aggressively at other African nations, China and even to countries like Bahrain and Ukraine to satisfy their raw material supply/demand situation.

Reports emerging from South Africa also speak of the fear of its coal sector being negatively impacted if the on-going strikes were to spread. Nearly 85 percent of South African electricity is produced from coal, let alone the fact that coal is also the nation’s major export earner. A widespread strike in this sector could well halt the entire mining sector because almost all are dependent on coal for fuel, and could also send its export numbers into a tizzy.

Recently, workers at the Forbes & Manhattan Coal Corp.’s South African Magdalena and Aviemore mines in Kwa-Zulu Natal had gone on strike for higher wages. Reports from there seem to indicate that a majority of these agitations are over after successful wage negotiations.

Along with India, the majority of bulk exports from South Africa are destined for other Asian nations such as China, Japan and South Korea for their steel mills and thermal coal power stations.