Is It Time to Buy Gold Again?

The FT seems to think so, saying Barack Obama’s election win is the “best possible result” for the gold price, as it is a vote for the status quo that has delivered a doubling in gold prices during his first term. 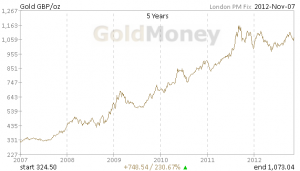 Not that the rise has been a steady progression. The gold price rose to a record in 2011 and has since traded within limits, making no ground for the last 12 months. The consensus is a combination of easy money and low interest rates, both of which are likely to persevere as far out as 2015, sets the scene for prices to rise towards year-end.

Nor are the analysts quoted by the Financial Times alone. Standard Bank, in a recent note to investors, said much the same this week, targeting a short-term price of $1,740/ounce when prices were sub-$1,700 prior to the election result.

Firstly, the realization that the Federal Reserve is not going to respond to stronger than expected data with tighter policy, and indeed interest rate markets do not expect the Fed to alter from this position.

The Fed says rates won’t rise before 2015 at the earliest. If rates can’t rise on stronger data, then the dollar is unlikely to rise, goes the theory. A Mitt Romney win may have heralded the introduction of a more hawkish Fed chairman, it was feared.

Secondly, the bank observes that speculative length in the futures market has declined substantially relative to a month ago, and thirdly, while the gold price was below $1,700, physical gold demand form Asia appeared to have picked up, especially in the run-up to Diwali.

The FT puts forward an additional factor as supportive of gold prices moving higher, namely the split control of Congress between the Democratic and Republican parties. This raises the possibility of political stasis, raising investors’ concerns that a lack of action will expose the US economy to a “fiscal cliff” of tax increases and spending cuts.

The paper quotes James Steel, precious metals strategist at HSBC in New York, who predicts that gold could rally to a high of $1,900 by the end of the year, within reach of the all-time peak of $1,920 set last year. “If divided government means diffused power and therefore greater uncertainty, that would be a recipe for higher gold prices,” he said.

“If one looks at the debt extension fiasco last summer – that is what propelled gold to an all-time high. Any replay of that has the potential to push gold up significantly.”

Gold bulls at least may be optimistic about the prospects following President Obama’s re-election; for the rest of us, more than a rise in the gold price will be required.