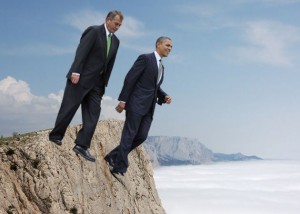 Although the tax cuts for upper incomes often generate some of the most intense debate, economically it is the least important; although politically the president now feels he has a mandate for action, it will have to be tempered in the interest of an overall deal.

So what can both sides agree on?

There appears to be some consensus that now is not the best time to increase taxes on lower- and middle-income groups, so item 3 is looking the most likely to find some common ground for leaving unchanged. Conversely, although many argue it would have an impact on employment, it seems less likely there will be an extension of item 5 – payroll and unemployment benefit.

Likewise, Democrats may yield to some cuts in items 1 and 2 – defense, Medicare and other government spending — in the interest of a deal. Certainly compromises will emerge, because neither extreme is tenable. The Congressional Budget Office has projected the impact of both — that is, all elements of the fiscal tightening allowed to be enacted and the other extreme of none of them in the following graph.

Under the first option (full implementation of the cuts, the blue baseline), the debt ratio would peak at 76.6 percent of GDP in 2014, and then decline to 58.5 percent in 2022. As Gavyn Davies observes in the FT, the US debt crisis would, in effect, be over, though the economy would probably fall into recession in 2013.

At the other extreme, if almost all of the fiscal cliff were postponed indefinitely, then the debt ratio would continue to rise rapidly, reaching 90 percent by 2022 (red line) with even more calamitous consequences in the long term.

A compromise deal would probably look something like the green line, with debt continuing to rise as lower- and middle-income tax cuts were postponed, but then fall as they are implemented around 2014.

The next month will be crucial.

Encouragingly, both sides have been making the right noises in recent days — let’s hope they mean it and aren’t just positioning themselves to blame the other side in the event of failure.