A lot of people seem to be trying to find reasons to buy silver.

In fact, there appear so few detractors that you wonder why it isn’t already at $50 per ounce. The main argument against that appears to be the not-unreasonable position that silver consumption is nearly 50-percent industrially dependent. 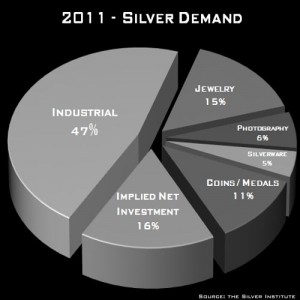 So with industrial growth slowing in Asia and heading into reverse in Europe, what hope is there for industrial consumption? Not so fast — supporters counter this with a range of counterarguments.

The first is that industrial activity may be heading into recession in Europe, but elsewhere it is showing moderate growth, which forms a positive platform for demand from jewelry and investment to build.

But jewelry demand hasn’t been as strong during last week’s Diwali festival in India as some had hoped.

Early reports range from “no demand and dull” – the Bombay Bullion Association quoted in the Indian Economic Times — to “silver has proved to be the preferred substitute to gold with most retail buyers this Diwali”; the latter from Manish Mehta, a bullion retailer quoted in Stockinvestor.

It may be too early to judge, but the consensus suggests that while cosmetic jewelry demand may have been quiet, investor demand for coins and commercial gifts has been more buoyant.

Indeed, investor appetite appears to be the most positive driver of silver demand, but if it isn’t due to rising industrial or jewelry consumption, where is this enthusiasm coming from?

In large part, it seems to be coming from the gold-silver ratio.

There are many situations in which gold-silver ratios are assessed, such as naturally occurring (as ores in the ground), total quantity ever mined ratios, and ounces held in investments ratios; but the most important is the price ratio.