Platinum Production, Prices Struggling in Spite of a Deficit

Could platinum be a story of short-term pain, long-term gain?

Platinum producers, resigned to the first, are no doubt hoping for the second.

Helped by the loss of some 200,000 ounces of production by Anglo Platinum alone, the South African production figures for this year are likely to hit an 11-year low, contributing to a global supply deficit of 400,000 ounces, according to Johnson Matthey as quoted in an FT article. Global mined platinum production stands at about 6 million ounces.

Yet in a market universally accepted to be in deficit, miners are still doing no more than breaking even.

Rising wages, weak PGM prices and high power costs have forced some producers like Lonmin, the third-largest producer, to make a rights issue after posting a $698 million pre-tax loss in the year up to September. Johnson Matthey has predicted prices will trade between $1,400 and $1,800 per ounce over the next six months, averaging $1,625.

Meanwhile, in a recent investors note Standard Bank suggested the metal will struggle to rise above $1,600 per ounce this year, but that in their opinion it made a good bet to buy at $1,500, supported in the longer term by the supply deficit and cost of production, in spite of poor demand growth from the automotive sector in the next 12 months. 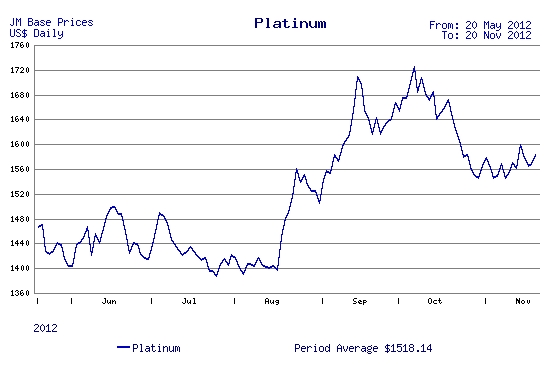 Prices have spiked as high as $1,720 per ounce this year, following unrest in South African mines (see graph above), but miners fear only the supply deficit is now stopping prices from dropping back to levels in the summer.

Supply pressures may be eased by the recycling industry.

According to the FT, Lucy Bloxham, principal marketing analyst at JM, estimates that scrap dealers had accumulated 200,000-300,000 ounces of platinum and a similar quantity of palladium as prices fell this year, and were waiting for a rebound in prices to release metal to the market.

This will also have the effect of limiting upside, the likely limits of which are not being set high by anyone at present. Standard Bank notes that where platinum may find support at $1,500-1,550 per ounce due to its relative value to the gold price, the upside is limited above $1,600 for the time being.

Catalysts consumers should therefore consider covering at least part of 2013 requirements if prices ease towards $1,500, as this may form the low point of a $1,500-1,650 trading range well into 2013.

As an average buying price in 2012, $1,500 would have represented a very acceptable level — prices have dropped lower for a month or two, but have also peaked to over $1,700.

The market is tighter going forward, and while demand is not strong and remains price-sensitive for applications like jewelry, the cost of production will provide support on the downside.