Blacksmithing Into the Future 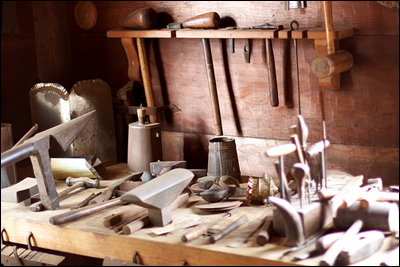 After happening upon an NPR article about the renewed interest in blacksmithing toward an “artisanal future,” I was reminded of the persons—women and men—who hammer and shape metal. The color of metal is black when heated. The word “smith” refers to making—in this case, objects of metal.

It’s a craft of visceral actions and acoustics: forging, drawing, shrinking, bending, welding, and finishing. Even the title of the blacksmith’s assistant is coined in a cinematic way: striker. Then there’s the environmental aesthetic: open space, anvil, hammer, tongs, vise, water trough, blast furnace. Ultimately, there is the drama of the raw material itself: wrought iron.

In total, the sights and sounds of blacksmithing constitute a mythic scene—and a romantic one. It’s a world where the metal’s heat is matched by the blacksmith’s heat (a more molten and polished version of “Fifty Shades of Grey”).

The NPR article featured Adam’s Forge in Los Angeles—“a cooperative of artist blacksmiths sharing knowledge, a place to work, tools, equipment and camaraderie.” Their “primary mission is to raise awareness, teach skills, preserve and advance the craft, and broaden and grow the blacksmithing community.” The Iron Age is echoing in the virtual age.

To Christina Sporrong of Spitfire Forge in Taos, New Mexico, the blacksmith “was essential as a doctor.” In a documentary short by New Mexico PBS, she explained, “I definitely have a huge attraction to metal and iron. It’s in us. It’s in our blood. It’s part of our composition as people.” Much like the team at Adam’s Forge, Sporrong is bent on demystifying blacksmithing as a discipline and activity, motivating all to flex their focus on matter, seething in legacy.