According to the World Bureau of Metal Statistics’ most recent report, the market surplus for primary aluminum between January and September 2012 was 488,000 tons, which follows a surplus of 1,871,000 tons recorded for the whole of 2011.

Production in January to September 2012 rose by 835,000 tons from the same period in 2011 and following on from a 3.1 million-metric-ton increase over the whole of 2011, suggesting a sharp slowdown in production growth.

So does that mean the market is gradually coming into balance and we can expect price rises as the market tightens?

Maybe not — although global production growth slowed the spread of closures and expansions varied around the world.

The WBMS reports that while production in the EU27 fell by 17.8 percent and NAFTA output fell by 2.3 percent, demand also fell with the EU27 down by 12.1 percent compared to 2011, even as global demand rose by 3.6 percent during the first nine months of the year, compared with the 2011 period.

China, meanwhile, has continued to expand production, aided and abetted by the Chinese state in a variety of forms, according to Andy Home in Reuters.  Chinese production has continued to rise, up 15 percent in October this year over October 2011, taking the annual rise to 10 percent so far.

The SRB has recently held the first of three or four tenders, each intended to buy up to 100,000 tons of primary aluminum at premiums of US $100 per ton over the domestic price. In itself, this move will not bail out established higher-cost smelters like Chalco which have been losing money for the last twelve months, but it is hoped this will send a signal to the market to shore up prices.

Beijing is right to be concerned — according to the article, the country is awash with inventory, some 2 million tons according to Macquarie, only a small part of which shows up on the SHFE inventory. 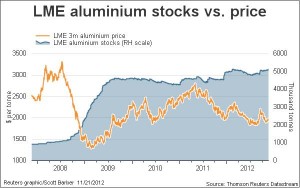 Meanwhile, inventory builds elsewhere, the addition of a net 56,725 metric tons this week into Detroit brought the LME to a record 5,172,500 metric tons. The location of the delivery suggests that even though US smelter closures this year have been modest, the market is still in surplus.

Reuters believes the low-hanging fruit of smelter closures in the West has already happened, and with the support of steep physical premiums available to producers selling on the spot market, further large scale closures are unlikely.

With Beijing and provincial governments so actively supporting Chinese smelters, it is unlikely any reduction in capacity will occur in the world’s biggest producer.

Draw your own conclusions on the aluminum price next year — excess supply equals strong forward curve, equals strong financial buying, equals tight physical market, equals limited smelter closures…and so it goes on. More of the same in 2013 as in 2012.