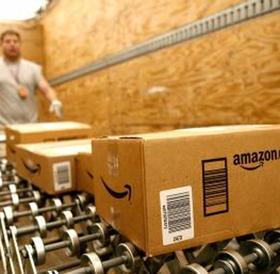 If you’re like most of the rest of the country, your life was in some small or large part affected last week by the crush of shopping commercials, crowds and other B2C craziness that accompanies Thanksgiving and Black Friday.

Or you kept the TV off, stayed away from strip-mall parking lots, and logged onto the likes of Amazon.com to get what you need.

Obviously, exponentially more Americans are using online shopping networks like Amazon.com rather than frequent their brick-and-mortar counterparts — that’s hardly a new trend. (Businesses, too, have Amazon Supply at their supply-chain-management disposal.)

What is interesting is that online shopping businesses such as Amazon are trying to shorten the supply chain and build even more warehouses closer to population centers this year, according to Ken Simonson, chief economist for the Associated General Contractors (AGC) of America.

After Simonson mentioned that tidbit during a recent webinar hosted by Reed Construction Data, I decided to get in touch with him to pick his brain a bit further on how big a blip online business warehousing is on the map of non-residential construction and, by extension, metal/material demand.

These types of moves will result in more efficient warehouse-and-distribution networks across the board, but companies like Amazon have an incentive to do so.

Simonson said that one of three big reasons for the warehousing push in general is that Amazon has been cutting deals with states to get around paying sales tax outright. In other words, certain states are offering deferrals of sales tax enforcement if Amazon builds a warehouse in that state, spurring jobs, etc.

This in turn is affecting the timing and placement of warehouses to a small degree. There’s less need for warehouses that used to serve a bunch of different stores, but a greater need for a “direct to consumer” kind of distribution. This leads to an almost hyper-localization of warehouses, Simonson said.

Before, Amazon was content with cheap land in, say, Nevada, and a ‘we’ll get it to consumers sometime” approach; now, that’s not really the case.

(Other) Drivers of (Other) Warehouse Construction

There are two main drivers of warehouse construction demand (which, in turn, spurs metals and raw materials demand), in Ken Simonson’s view, outside of the online retailer sphere.