China Subsidizing Rare Earth Metal Companies Gets Prices Back Up

There are two schools of thought regarding China and the rare earth metals markets. One holds that China has been hell-bent on global domination, and the other that the country has been a victim of its own lax mining controls, forcing it to step in and hand the industry over to its state cronies.

We have held more to the latter over the last few years as prices skyrocketed, blaming the rise more on investors keen to cash in on supply fears than the Chinese manipulating the market. Prices subsequently crashed when the bubble became unsustainable in a slowing global economy.

We wrote last month about how prices had fallen, but also about how the falls were uneven with the most resilience being shown by the comparatively rarer heavy rare earths. Well, anyone using the

MetalMiner IndX℠ to track Chinese rare earth metal and oxide prices will be aware that prices of those heavier rare earths have not just stopped falling, but started moving up again, whereas lighter rare earth oxides are flat-lining.

Does this mean demand is on the rise? 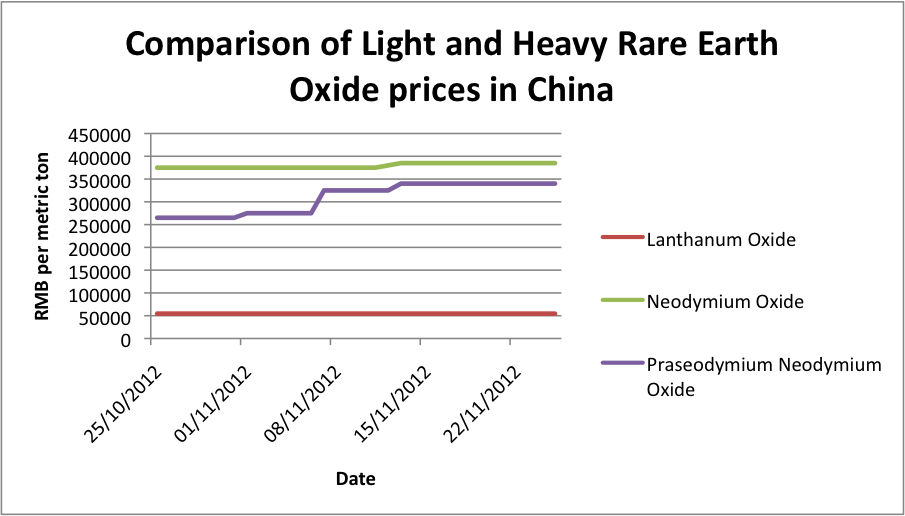 No, it probably means the state producers’ hold on the market is beginning to be effective and by restricting supply, they are forcing up prices to what they see as more realistic levels. China’s export activity is showing signs of improving, as the most recent HSBC flash PMI numbers suggest, but not to the extent that demand is outstripping supply. This price rise is supply side-induced, not demand-side pressure.

With Molycorp ramping up production across the range of rare earth metals and Lynas taking receipt of its first shipments of concentrate at its brand-new yet much-delayed processing facility in Malaysia, prices should, if anything, be continuing to fall.

However, a report in the FT illustrates the extent to which Beijing is going to support its state rare-earth-mining companies, feeding subsidies for both ore mined and oxides produced.

Under the new Chinese scheme, licensed rare earths miners and processors will receive subsidies of Rmb 1,000 ($160) per ton of ore mining capacity, and Rmb 1,500 per ton for processing capacity, raising concerns that Beijing does not want to lose its dominance of this market to Western competition.

As our old friend and well-respected industry expert Dudley Kingsnorth is quoted as saying, production outside of China will grow from 6,000 tons per year in 2011 to 60,000 tons by 2015. Faced with that level of competition, China’s move to shore up its position can be seen for what it is. Beijing has long seen the presence of a vibrant domestic rare earth refining industry as a major plus in attracting high-tech manufacturing operations to set up in China.

By covertly and overtly helping the domestic state producers shut out private domestic competition, by supporting their expenditure on R&D into improved refining techniques and by restricting domestic production to shore up prices, Beijing is doing all it can to ensure producers remain in good health as global availability rises.