A few years ago, ArcelorMittal was being hailed as a hero of the steel industry, forming the world’s largest steel company from a number of disparate entities.

Lakshmi Mittal’s achievement is still formidable in hindsight, but he and his fellow steel producers in Europe must be wondering when the pain is going to end.

Steel production in Europe is fraught with political interference and chronic overcapacity, the one preventing remedies for the other. A recent article in the Financial Times sums up the malaise rather well, indicating that according to industry figures, finished steel demand in the EU fell about 23 percent between 2007 and 2011, while rating agency Moody’s reckons the drop could be nearer 27 percent by the end of this year.

Check out MetalMiner’s coverage of the latest Moody’s reports detailing steel demand outlooks for both Europe and Asia.

Yet in spite of that capacity, closures have been limited and politically fraught.

ArcelorMittal has just struck a deal with the French government over the scheduled closure of two blast furnaces at Florange, in which the firm has agreed to convert the two blast furnaces to a new low-emission, environmentally friendly process known as Ulcos, in return for €150 million (US$ 195m) of state aid to largely fund the conversion. A deal that we have just heard looks like it may yet unravel before its even got off the ground.

The blast furnaces won’t re-start until market conditions permit (which could be never), yet the 600 workers won’t be made redundant, if the deal goes through – a politically expedient result and typical of European state interference in the industry. 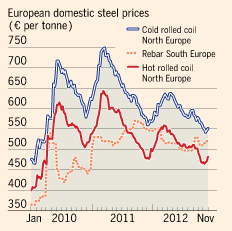 Back to Europe as a whole: Moody’s estimates Europe’s production base, at about 210 million metric tons, may be 40 percent higher than consumption.

Plants running at less than 70% capacity are not going to make much money, and not surprisingly, the agency is forecasting European steelmakers’ profitability could worsen next year as demand in the region declines by another 2-4 percent and prices stay depressed.

The FT says light vehicle sales in Europe are forecast to contract by another 2-3 percent in 2013. Public investment in infrastructure projects is being curtailed by government austerity programs, and construction spend overall could also fall.

Meanwhile, order backlogs at the big capital goods companies, even in Germany, have been weakening, the FT says: Siemens’ book to bill ratio, for example, fell from 1.11 in the last three months of 2011, to 0.99 in 2012’s September quarter. 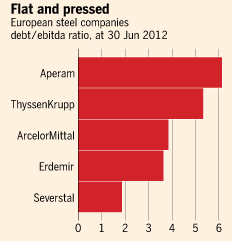 ArcelorMittal is not alone in feeling the pain in Europe. ThyssenKrupp is right up there with them, and most of the steel mills are struggling with high debt, poor sales and wafer-thin margins.

The industry desperately needs to rationalize.

Each is hoping his fellows will do it first, but with governments desperate to hang on to every job, even plants guilty of flouting every environmental rule in the book (such as Ilva’s Taranto mill where the government has gone to the extraordinary steps of changing the law to prevent the courts closing down the polluting plant because it would cost jobs) — what hope is there?