The Driver You Should Be Tracking for Gold Prices in 2013

The gold price has been rangebound in 2012, from $1,540 to $1,790 per ounce, and some reports, such as in the Telegraph, point to rising ETF demand as evidence of robust overall demand and the price having further to go.

Citing a Goldman Sachs report, another article suggests prices could hit US$ 1,800 per ounce next year while quoting PNB Bank as saying, “…we expect gold to achieve a new record high in 2013 due to further monetary easing, less tail risk related to a break-up of the Eurozone and ongoing support from physical demand.”

But has demand been that strong?

A Reuters article looks more closely than any of the recent big-time analysts’ reports, and focuses on Asian buying — the source of some 40 percent of physical gold demand. India and China are by far the two largest Asian gold buyers, and in both countries demand has been muted. 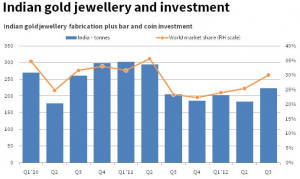 Indeed, the article states that top-spot India was down 28 percent in the year ended September, equating to a massive 305.9 metric tons, according to calculations using World Gold Council data. A combination of price rises and more importantly weakening rupee exchange rates have made 2012 gold prices historically at record highs for Indian buyers.

What About China’s Gold Demand? 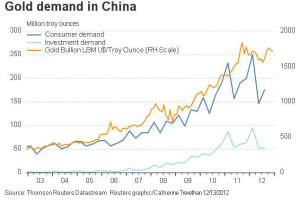 Meanwhile, Chinese demand has also disappointed, falling to 176.8 metric tons in the third quarter, a drop of 8 percent from the same quarter a year ago and a bare 1 percent rise in year-on-year terms.

Chinese buyers appear to buy gold more when the price is rising in a trend, or when they are worried by domestic inflation — neither of which has been the case this year, or expected to be next year

The focus of analysts’ assessments regarding factors influencing the gold price has centered around monetary loosening in the United States, central bank buying and investor interest in ETFs, but in themselves, Reuters believes these aren’t enough to drive greater demand or higher prices.

Based on the evidence so far this year, gold watchers may be better advised to track Asian demand than financial markets to gauge future direction. Higher prices in 2013, as the Telegraph suggests? Our view is, fiscal cliff or Euro debt crisis meltdown excepted, prices could average lower next year, not higher.