The numbers coming out of China can appear conflicting.

Iron ore imports are also robust, with the TSI Iron Ore Spot reference price on the rise, accompanied by rising swap trades and growing use of the reference point. But we wondered if the TSI price, like the Platts 62% Iron Ore price that closely matches it, was a leading or a following indicator. 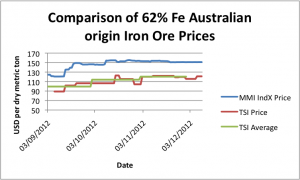 The following graph is a simplistic comparison of the MetalMiner IndX 62% Australian fines market price in China, compared to both TSI prices and a monthly average of the TSI price.

We have taken TSI prices on days when prices have changed significantly, as we don’t currently track the TSI daily, but for the purposes of the exercise, the graph suggests that the domestic market leads TSI price movements and as such would be a valuable aid to predicting price movements on the swaps market.

The domestic iron ore price jumped from RMB 945 to 975 between Monday and Tuesday of this week — quite a price rise. It would be intriguing to see if the swaps market follows, should the trend persist.

(One day’s price movement is probably too granular to make predictions on; several days or even a week’s trend is probably more reliable.)

But it comes back to the original assertion — what moves markets?

If you can get some visibility early on via correlating indicators, it can be a huge advantage.

PREVIOUS POST:
Copper ETFs: What Is All the Fuss Really About?
NEXT POST:
3-Month Price of Aluminum Improves Slightly