One Forecast of Metal Prices This Decade: What Smart Folks Say

It’s nearing the end of the year and the forecasts are out.

We love this stuff: what are the learned (and not so learned) predicting for the year(s) ahead?

First up is the Economist Intelligence Unit (EIU) — we place them towards the top of our “learned” list and so worthy of a review. Unfortunately, the EIU hasn’t produced a commentary with their numbers, but we can read between the lines with the help of current trends and recent commentary of our own.

For ease of discussion (and because we like pretty colored graphs) we have transferred their tables into graphical form and split up the metals into base metals, steel and precious metals.

First Up: Base Metals Prices 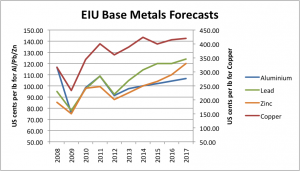 The scales have been adjusted on our base metals graph to try to illustrate the predicted price movements relative to other metals. If they were all on the same scale, aluminum would appear to be flatlining relative to, say, copper, when in fact the EIU is suggesting a modest 9 percent increase in price between now (today being roughly the 2013 average price) and 2017, or a 17 percent increase over the average for 2012.

Copper, on the other hand, they see as rising 16 percent over the same period, but kicking off earlier with an 8 percent increase next year for average 2013 over today’s current price. Lead, like aluminum, has already reached the EIU’s forecast average price for next year, suggesting further upside is limited in the short term, but even so, in overall percentage terms, lead is expected to rise the most – some 34 percent by 2017 over its average for 2012 and still 18 percent over the price today.

On To Steel and its Main Cost Input, Iron Ore 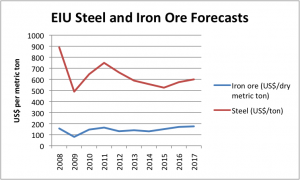 As the graph shows, the EIU expects steel producers, at least vertically integrated producers dependent on iron ore as a raw material, to remain under price pressure through the middle part of this decade as iron ore prices are expected to rise while finished steel prices continue to fall – at least up to the mid-decade.

There will be regional variations in finished steel prices with those in Europe remaining under the most pressure, while those in recovering economies like the US doing relatively better. Integrated steel producers generally will experience raw material price pressures, but those exposed to spot pricing contracts will likely be more so than those on long-term agreements or with captive supplies.

Such cost pressures are likely to hasten consolidation among European steelmakers most exposed to weak domestic markets. 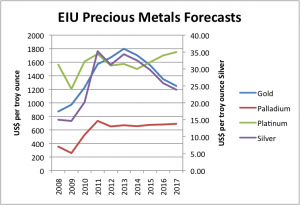 Our precious metals graph can be seen as an expression of global recovery. As economies recover from the global crisis, and the US fiscal cliff and European debt crisis are resolved, the need for quantitative easing and loose monetary policy will be removed, cutting support for gold and silver; assuming such policy is reversed early enough and inflation doesn’t take hold.

While rising industrial demand, both from automotive and industrial/chemical catalysts, drives demand for platinum and, to a lesser extent, palladium. If this is correct, the EIU’s decline of gold/silver and rise of platinum can be seen to lag as the economies only gradually respond to improving sentiment and investment, while the investment community reacts more rapidly to changes in monetary policy.

Keep in mind: this is but one well-informed view of the next five years. We have seen projections suggesting rampant inflation followed by another recession by 2018. Clearly the EIU doesn’t hold with that view, but it does go to show that much as we like the EIU’s view of stable and gradual recovery, such far forward projections should be taken with a pinch of salt.