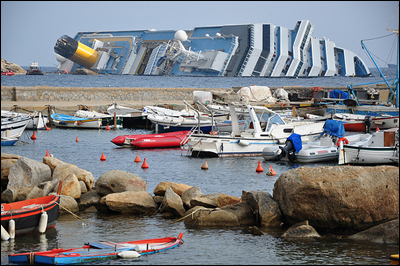 Human, environmental, artificial, mechanical—the sinking of cruise ship Costa Concordia was, and is, a tragedy on many levels.

Since its deadly evacuation off the Italian coast on the night of January 13, 2012, the ship remains submerged at Isola del Giglio, Tuscany. More than an eyesore, it commands the intensive attention of many people and tools dedicated to salvaging it before the damage multiplies.

The physical and emotional demands are overwhelming.

When the news show 60 Minutes reported on the ship’s removal, which began in July, the plan to remove and clean up the wreckage was one gigantic measurement after another: spanning three football fields at 114,000 tons+ (minus 2,380 tons of diesel fuel).

It is a painful reminder of the 30 passengers killed, two still missing, and 64 injured. Maximizing heavy-duty cables, cranes, boxes, and other metallic methods, Florida-based Titan Salvage and Italian engineering firm Micoperi are in a race against time (and bouts of uncooperative weather).