Why Eaton Corp, Other Manufacturers Not Sold On Fiscal Cliff Deal 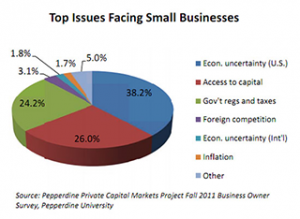 The top three issues displayed here as of Sept. 2011, will likely get worse in 2013 for US manufacturers. Source: Pepperdine University

Although we here at MetalMiner and our sister site Spend Matters have been talking about how going over the fiscal cliff could have actually been a beneficial lesson, it turns out the 11th hour deal has its proponents.

However, not too many of those reside in the corporate and manufacturing sectors.

Although certain business-tax breaks have been extended under the most recent deal, the biggest issue is that uncertainty still reigns, as Congress will have to come together again in a few months to deal with the debt ceiling — and that is what stifles decision-making for a host of manufacturers, including metals producers.

Quoted in the Wall Street Journal, Eaton Corp.’s CEO Alexander Cutler, put it pretty succinctly. “Now we face another fiscal cliff in two months’ time,” he told the paper. “This virtual rolling thunder style of negotiation and lack of progress has done nothing to reduce uncertainty—uncertainty that continues to negatively impact investment and job growth.”

As a maker of electrical and hydraulic equipment, Eaton’s challenges are reflected in companies across the country, no matter the scale.

Several manufacturers of all sizes, including Liberty Diversified International and Acutec Precision Machining Inc., voiced their opinions in the article, ranging from not-so-bad to doomsday scenarios.

But the overall picture shows that no matter what happens, economic and manufacturing growth will remain stagnant (some economists are saying that the payroll tax hike will take a half percentage point off growth in 2013), directly affected by US legislators’ insufficient action.

Several trade associations, including the National Association of Manufacturers (NAM) are calling for comprehensive solutions to the debt crisis, seeing the current deal as only the tip of the iceberg, as economists are calling for a significant slowdown in the first three months of 2013.

So with the fiscal cliff as a backdrop, where will metals and other commodities prices, in addition to key economic indicators, be going?

In the next three months, Reuters’ technical analysts are calling for US oil prices to be range-bound between $77-104, while Brent crude oil tops out at about $100 per barrel.

Meanwhile, the Baltic Dry Index, after ending its current dip in the 600 range, will inch up toward its recent high of 1,104 by March.